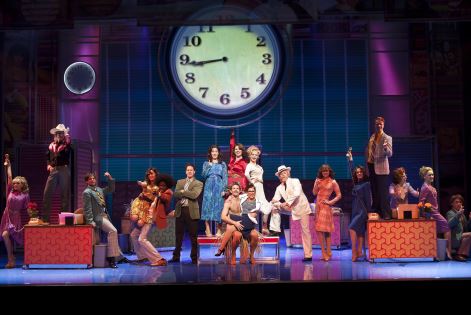 Get set to board a plane and take off to Dollywood with the spectacular musical that is 9 To 5. With a whole load of glamour, sparkles and humour on offer, in addition to some romance you would be mad to miss it!

Based on the Oscar nominated film, the show trails the work life of three female office workers who form an unlikely friendship to get even with their arrogant and sexist boss.
This sassy showstopper, directed by Jeff Calhoun features a variety of twists and turns, big hairdos and plenty of belly laughs.
Two Pints Of Lager And A Packet Of Crisps actress Natalie Casey, theatre experienced Anita Louise Combe, The Bill actor Ben Richards and Mamma Mia!’s Jackie Clune are just a few names on the superb cast list. There is even some surprise on screen guest appearances from Dolly, the queen of Nashville herself.
This outrageous comedy is a guiding point on how teaming up and taking care of business can go a long way.
9 To 5 features a number of Dolly Parton’s hit songs including, ‘Backwoods Barbie’, ‘Shine Like The Sun’ and of course the original smash hit ‘9 To 5’.
Join in on all the action with this highly amusing, entertaining and totally fabulous musical that is an absolute triumph.
9 To 5 The Musical is at The Marlowe theatre in Canterbury from Monday 8th to Saturday 13th July, with performances every evening at 7.30pm and matinee shows being held on Thursday and Saturday at 2.30pm.

Published on 10 July 2013 by TasminAnderson