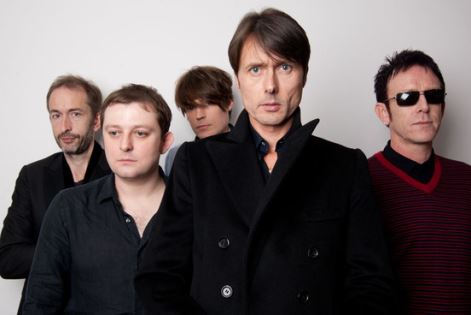 Kendal Calling returns for a 9th action packed year with a whole host of incredible artists confirmed for the Lake District festival.

Not content with winning more awards (Best Medium Sized Festival at the UK Festival Awards) and breaking world records (most people dressed as Superman in one place – 867 since you’re asking!) the Kendal Calling team have surpassed themselves with the first wave of acts to be announced for 2014.
2014’s first headliner Suede are one of the most revered British bands of the last 25 years with Brett Anderson and co racking up a host of much lauded indie singles and albums. After a hiatus the band returned in 2010 and released the critically and commercially acclaimed album ‘Bloodsports’ in 2013.  This is a band once again riding on the crest of wave and the first headliner to be announced with more due to follow imminently.
Frank Turner’s anthemic folk-punk has seen him rise to become one of the country’s biggest musical artists of the last few years, accruing a large and devoted following and placing him firmly at the forefront of the new guitar renaissance in the UK.  His five albums have given him an enviable body of work and Frank Turner is undoubtedly one of the most powerful live performers around. Frank has a real love affair with Kendal Calling having played twice before and has risen through the ranks to secure a well-deserved and much requested headline slot with his band The Sleeping Souls.
The much anticipated Hip Hop Legends slot this year goes to hip hop pioneers De La Soul. This slot is as much a part of Kendal Calling folklore as the fancy dress theme and the Real Ale tent and after last year’s blistering performance by Public Enemy the From The Fields team are delighted to have secured a more laid back performance from the daisy age, ‘3 Feet High and Rising’ legends who celebrate 25 years in the game in 2014.
Miles Kane is a man noted as much for his sharp suits and dress sense as his angular music and lyrics and this most modern of pop stars will make the short journey from Liverpool to the lakes.
Happy Mondays are Madchester royalty and in frontman Shaun Ryder possess and unlikely national treasure.  Their set will be a hugely anticipated affair as fans gather to hear seminal baggy anthems such as ‘Step On’, ‘Kinky Afro’, ‘Hallelujah’ and a host more as the Mondays baggy swagger engulfs the Lake District.
The Glow Tent is a haven for lovers of the very best in electronic music and the line-up for 2014 is the best yet.  David and Stephen Dewaele are famous worldwide as both Soulwax and 2manydjs who's album "As Heard On Radio Soulwax Pt. 1" completely revolutionized the dance music landscape in the early 2000s, for its imaginative mixture of artist and genres from all eras. 2manydj’s are widely acknowledged as one of the most innovative acts on the planet and their mash up mayhem will have Kendal Calling in raptures.
Other confirmed acts include RAM Records founder and drum & bass don Andy C, Radio 1’s new music head honcho Zane Lowe, electro duo and local heroes Bondax with and all-star cast of b2b sessions, Metalheadz royalty Goldie, MJ Cole and a host of other swashbuckling turntable evangelists.
Other confirmations include Razorlight with their arsenal of alternative anthems, Brits Critics Choice winner and keyboard pounding singer songwriter Tom Odell and recent number 1 singles acts and electronic collective Clean Bandit who are one of the most exciting breakthrough acts in the UK right now.  Newton Faulkner’s unique, percussive guitar playing and emotive songs are sure to provide one of the weekend’s biggest sing-alongs while Gorgon City get ready for your love and bring their booty shaking bass to the Lakes.
Other exciting acts confirmed to perform include indie stalwarts Athlete, breakthrough indie rockers Breton, Rudimental collaborator Ella Eyre, undefinable musical guru and champion tea drinker Mr Scruff.  Many more acts have been confirmed to play with hundreds more set to join them in August in arguably the most beautiful festival site in the UK.
Kendal Calling festival is renowned for its expansive cultural offering presenting a smorgasbord of artsy treats for festival goers.  With some amazing musical artists providing sustenance for the soul, the arts programme offers some welcome nourishment for the mind and body as an eclectic array of performance art, comedy and spoken word takes place over the weekend in the stunning surrounds of the Lake District.  With gourmet food, a real ale festival and the dedicated children’s Ladybird Arena as part of the mix, Kendal Calling is one of the UK’s best festivals and outstanding value at just £119 for the weekend.
This year’s fancy dress theme is Kendal Calling Goes Beyond The Stars as the festival once again becomes a mecca for culture vultures and party people.