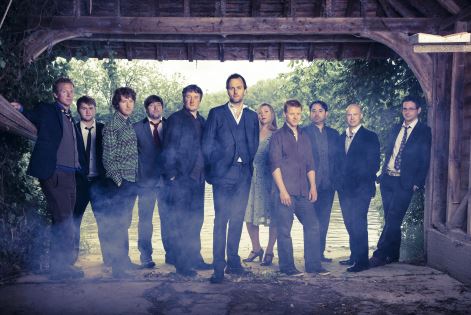 Folk by the Oak will once again be bringing an exciting and eclectic festival ‘line-up of headliners’ to the Queen Elizabeth Oak Field at Hatfield House on Sunday 19th July. Mercury Music Prize nominees The Unthanks and Britain’s most successful trad

A blistering 11-piece band fusing folk, funk, rock, world, jazz, music hall and classical music, Bellowhead have placed themselves at the cutting edge of the contemporary music scene, become a key fixture on the festival scene and won BBC Radio 2 Folk Awards Best Group twice and Best Live Act an amazing 5 times. They celebrated their 10th birthday this year, as well as signing to the legendary Island Records label and releasing the album Revival in June featuring their powerful and eclectic take on traditional English folksong.

Since releasing 3 project albums in 2012 The Unthanks, Tyneside sisters Rachel and Becky Unthank with pianist, producer, arranger and composer Adrian McNally, have been hiding away in Northumberland, quietly working on an ambitious follow-up to 2011’s Last. The resultant Mount the Air promises to be a rich, imaginative and groundbreaking album which will be brought to life on stage with a talented 10 piece band.

Definable only by their restless, peerless eccentricity, the Unthanks have a history of working with artists as diverse as Orbital, Sting, Adrian Utley (Portishead), Martin Green (Lau) and the Moulettes to name but a few.

Published on 09 December 2014 by Ben Robinson

Folk by the Oak 2015 Bellowhead