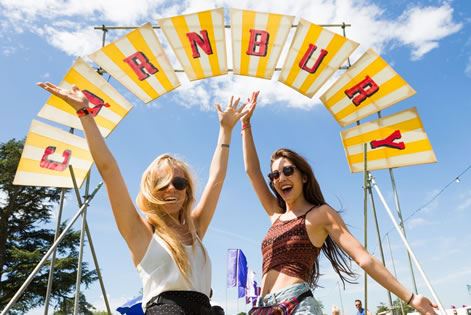 Superstitions aside, Cornbury Music Festival opens its earlybird ticket sale for the 13th edition of this popular family festival at 9am on Friday the 13th of November.

Next year’s festival, entitled The Baker’s Dozen, will be held as usual at the stunningly beautiful Great Tew Park near Chipping Norton from 8-10 July 2016.

Festival organisers are offering up to 50 per cent off weekend tickets and campervan passes for the earlybird period; but music fans will have to be quick as earlybird tickets are likely to sell out before the end of November. With the discount, an adult weekend camping ticket costs just £165 - a saving of £35 - with children’s weekend camping tickets better than half price, at only £15.

Next year the Festival Friday will also feature a full day’s line-up with the arena opening at 9am and artists performing from 11am.

‘I’m pulling out all the stops on the line-up for 2016,’ says organiser Hugh Phillimore, ‘and so far we’re getting good results with two of our headliners and eight other main acts already confirmed. I’m absolutely determined that Cornbury 2016 will be an even better year.’

Just good friends Cornbury Music Festival is marking its 13th year with a special membership club to reward its loyal fans. Announcing the scheme Hugh Phillimore says: ‘Twelve years ago when we started this extraordinary adventure, we offered a life membership scheme which guaranteed VIP tickets for life with a one-off payment. We were brimming with confidence and enthusiasm. Although only a dozen people shared our belief, they’ve been rewarded for their faith with a very very good deal and are still receiving their free tickets today.

‘As we head into our Lucky 13th year, like the Baker’s Dozen we’ve decided to offer a bit more and are introducing a new friends scheme. This time it’s available primarily on a yearly basis and is much more affordable than our original scheme, offering an extended period for an earlybird-type discount as well as other benefits. We’ve retained a life member option for the spot-a-good-longterm-deal Cornbury supporter, the uber enthusiast, the life lottery winner and the very generous person!’

To buy Earlybird tickets go to cornburymusicfestival.com, where you can also sign up for the membership scheme, or call the ticket hotline 0844 338 0000 from 9am on Friday 13 November.

Published on 09 November 2015 by Ben Robinson