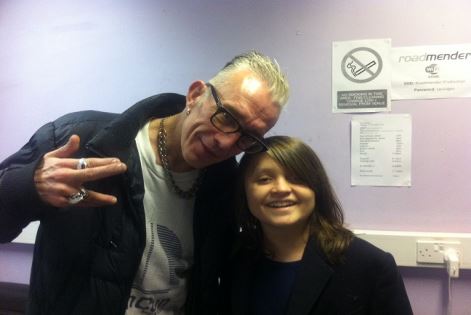 Our very own Ned Dylan recently interviewed Alabama 3's Larry Love about the new record, industry changes and the internet! Check out what he had to say...

ATMOSPHERE builds in the Roadmender as members of ALABAMA 3 walk onto the stage. Sound starts up and it’s given the silence it deserves. Nick Reynolds aka Harpo Strangelove adds Harmonica creating the perfect atmosphere of anticipation.

Aurora Dawn kicks in with her powerful vocals as the show starts and the man I’ve just interviewed, Larry Love aka Rob Spragg enters the stage oozing casual cool wearing a leopard print jacket. He soon throws the jacket onto the floor and the band burst into new album Aurora Dawn-penned track ‘Bam A Lam’. Despite being new, the crowd lap it up as if it was an old favourite.

Talking of the new record ‘the Wimmen From Womble’ Larry tells me..

“it’s an ongoing gamble that we are willing to take because of the quality of the players around us. If you notice the album is under Alabama 3 presents, not Alabama 3. If you, as a musician, are willing to collaborate, you end up with revolutionary music.”
The new record is part 2 of 3 with the first album getting a mixed reception from the fans. But Larry doesn’t seem to care; in fact I’d go as far as to say he loved it.

“People really hated it [Womble Album #1] or really loved it, which I really like. We like to f**k with people’s heads you see.” The album is not just another record for A3 as it is released on their own record label Hostage Music. They’re truly cutting out the middleman and letting fans into their world; from their stomping ground the Jamm Brixton to their new signings.
“I’d say to any young band now, you could do a record in your bedroom, set up your own label. I think it’s quite important that young musicians don’t believe in that hype of having cocaine, pools, limos, and f**ing hot tubs in LA. That aint gonna f**ing happen, forget that. You’ve gotta work for the graft; make your own videos, set up your own label. I think that if majors [labels] are going to pick you up they’ll check that out.”
As the industry changes with labels not being as important as they used to be and as Larry put it ‘A&R W*nkers’ on the demise, Alabama 3 are adapting.

“I think that any artist worth their weight in the music industry knows that a lot of the industry was utter bullsh*t. These w*nkers in A&R who get paid loads of money to f**king sniff coke and f*ck innocent people over. They aren’t there any more. Setting up your own label is the new way forward.”
The beat-driven ‘Wimmen From Womble’ is the follow up to 2013s the ‘Men From Womble’. Hence the title Womble #2 has many female guest vocalists, and lightly touches on feminism.

“This whole new way for misogyny is developing on the internet. And I think it’s gonna have a backlash. The girls all getting together and saying ‘F**k you motherf**kers.’ We’re up against the wall – but what do I know? A man says he’s a feminist; he’s not he’s a f**king pr*ck. I’m just very interested in strong women and what they do, they’re scaring me.”
Not only is Larry interested in how the Internet’s affecting women but also how it’s affecting the music industry, for good and for worse.

“I think the Internet can be good and bad. Talking to people face to face, in the pub, I think is much more important than having a virtual relationship. I find the Internet contaminating; Alabama 3 have always made an effort to interact with their fans on a real basis. I think that’s why we’re still going today.”
Larry is also concerned about the way Facebook are treating new bands and the way labels are using it.

“It’s sick. As the industry’s shrinking, labels are getting more and more desperate to market their artists. And they’re using Facebook, and they’re all f**king squabbling on there. Paying for them to have likes and all that sh*t. It’s getting twisted.”
A3 are a real band and they don’t need to buy anything to improve their status with live shows like tonight’s. To quote Frank Turner ‘there’s people who play music. Some of them are just like us and some of them are d*cks.’ Well Alabama 3 are just like us. Keeping fresh and innovative they are up there with the best.
A man who I have shamefully failed to mention yet is the Rev. D Wayne Love, whose lovable mannerisms and unenthusiastically yet perfectly spoken banter is always a winner.
Larry finishes their 2 song encore signing ‘Northampton you are the one’ before leaving the stage to a crowd still eager for more. The show was so good I can’t wait for festival season 2015. In fact I’m tempted to catch them at another date before the tour ends…

Published on 09 November 2014 by Wayne Feltham