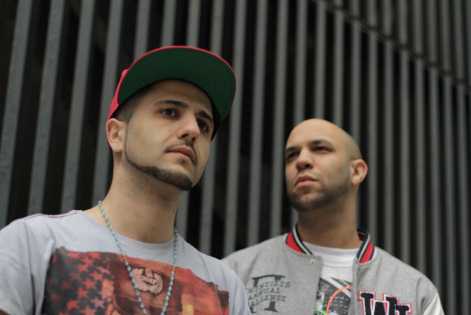 Comprised of producers / remixers James Roach and Mario Christophi, Famous is an act set to flourish in clubs, blogospheres and radio airwaves in 2012. Both James and Mario cut their teeth as DJs on their respective local circuits, before making the step up to crafting their own sounds and composing a varied synthesis of dubstep, house, RnB and DnB. Individually they have diligently assembled an enviable discography, with James remixing the likes of Wolftown Committee and Skinnyman, as well as producing for US singer Marva King (part of Prince's New Power Generation) under his hip hop pseudonym of 'Jayare', whilst Mario previously made up half of the now disbanded duo Soul Tactics, who picked up heavy BBC 1xtra support and toured the clubs of Ayia Napa extensively in 2006.

Having joined forces officially in 2011, Famous are now ready to emerge onto the mainstream stage with their contagious new single 'Alien'. Ethereal synth chords and pulsating basses form the backbone of the record, while Kristal's dynamic vocals drive the theme forward with effortless unpredictability. Dubstep-come-DnB amalgamations may seem rife at the moment, but 'Alien' is one example which differentiates itself by combining bass heavy, booming production with concept driven lyricism to powerful effect.

Check out the official video: