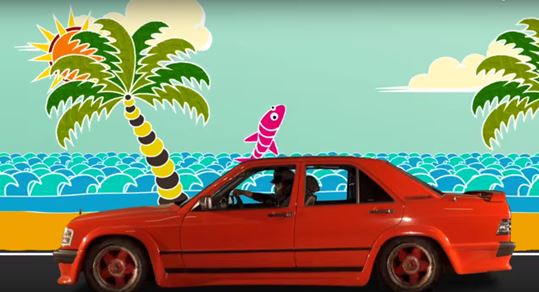 At this year's Secret Garden Party, you could be in with the chance to win a red Mercedes 190E that once belonged to the late, great Desmond Dekker.

Thought the best party of the year couldn't get any better? Well, it can! At this year's Secret Garden Party, you could be in with the chance to take your summer into top gear *ahem* with the chance to win a red Mercedes 190E that once belonged to the late, great Desmond Dekker.

Forget the usual food hamper, a dusty bottle of sherry from the back of the larder, or even dinner for two at the local eatery, this Garden Party has a raffle prize really worth winning.

The Secret Garden Party is offering attendees at this year’s event the chance to win the unique raffle prize of a classic red Mercedes 190E, formerly owned by Jamaican reggae legend Desmond Dekker, marking the 10th anniversary of his untimely passing in May 2006.  Since then the car was parked up on band member Delroy William’s drive and remained there for the duration.  However, earlier this year in tribute to Desmond it was fully restored courtesy of Secret Garden Party organisers, a restoration that took over 3 months.

Delroy and Desmond were consultants on the very first Secret Garden Party and headlined as Desmond Dekker and the Aces in 2005. Delroy has continued to act as music consultant every year since.

‘Desmond Dekker was on his way to Croydon, when he noticed the car in a showroom. He stopped immediately, he just had to stop. It was love at first sight. Within the hour Desmond drove off in his new Mercedes.’

Making the video was the first time Delroy had actually stepped into the car, immediately bringing a tear to his eye. He hadn’t actually sat in the car once, in all the time it was parked on his drive.’

Delroy met Desmond back in the sixties, with the pair quickly forming a close, brotherly bond that soon led to them collaborating musically as Desmond Dekker and The Aces, performing at venues around the globe and recording new material for the then revitalized Trojan Records.

But it all came to an abrupt end with Desmond’s tragic passing and despite numerous requests to take the Aces band back on the road Delroy repeatedly refused knowing nobody could possibly replace his beloved ‘brother’.

With the passing of time and numerous requests Delroy has reunited the original members of The Aces to perform in tribute at this summer’s Secret Garden Party. The line-up comprises Delroy Williams , Brian Campbell, Leroy Green, Gordon Mulrain, Aubery Mulrain and Steve Baker (he replaces the original guitarist Steve Roberts who tragically committed suicide five months after Desmond’s passing).

By offering the car as a raffle prize and having the original Aces play live the Secret Garden Party this July the organisers’ intention is to celebrate Desmond’s influential music and legacy.

The original Aces perform in tribute safe in the knowledge that their dear friend and colleague would be proud of their role in ensuring his wonderful music will never be forgotten.