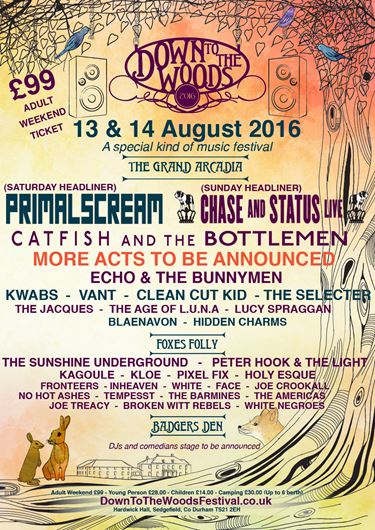 The all new Down To The Woods festival recently announced its headline acts......

The all new Down To The Woods Festival takes place in the grounds of Hardwick Hall, Co Durham over August 13th & 14th.

With a fantastic line up in this, its first year, Down To The Woods is set to be an exciting annual addition to the UK’s festival calendar - and the only festival of its size and calibre in north-east England.

Primal Scream are set to headline the Saturday in front of a 10,000 capacity family-friendly crowd, while Sunday is in the hands of Chase & Status. Other acts on the bill across the weekend include Catfish and the Bottlemen, Echo & The Bunnymen, Peter Hook & The Light and many more.

The line-up for a third stage, the Badgers Den, will be announced shortly with top DJs and live comedy.

Weekend tickets for Down To The Woods are priced at £99 per adult, £28 for young people aged 13 - 16 and £15 for children aged 3 - 12. Day tickets are available and there are also boutique camping and special ‘Gold Ticket’ VIP options.