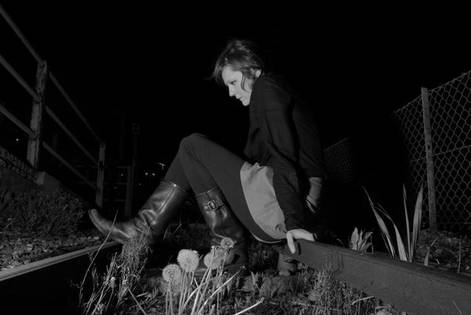 Mechanical Bride aka 25 year old songwriter and self-taught musician Lauren Doss today announces details of a May UK tour with the Smoke Fairies.

Lauren Doss made quiet but confident waves back in 2008 with her debut release, a collection of beautiful songs called 'Part II: EPs'. On the mini-album was a version of Rihanna’s ‘Umbrella’, an affecting cover that seemed coated in icicles, more a haunted nursery rhyme than the original pop smash. The track received plays all over the airwaves from Radio 1, 2 and 3 to BBC6 Music and XFM and anchored this exquisite mini-collection that gained her critical acclaim as an exciting and talented new British songwriter as well as comparisons with the likes of PJ Harvey, Bat For Lashes and Laura Marling.

‘Colour Of Fire’ is a stand out track from the forthcoming album, with Lauren’s intoxicating vocal tugging at your heartstrings as she sings around a swirl of piano and lingering strings. What captivates is Lauren’s voice, at once modest yet gracefully timeless. Evoking jazz singers of a bygone age from one moment, to contemporary folk the next, her warm vocals turn feelings of loss and love into something deeply heartfelt. ‘Colour Of Fire’ is an unassuming delight.

The breathtaking video for 'Colour Of Fire' - shot in Berlin at the same place as The Pianist.

A full list of forthcoming UK tour dates (including a show at Brighton's Great Escape this Thursday) is as follows: