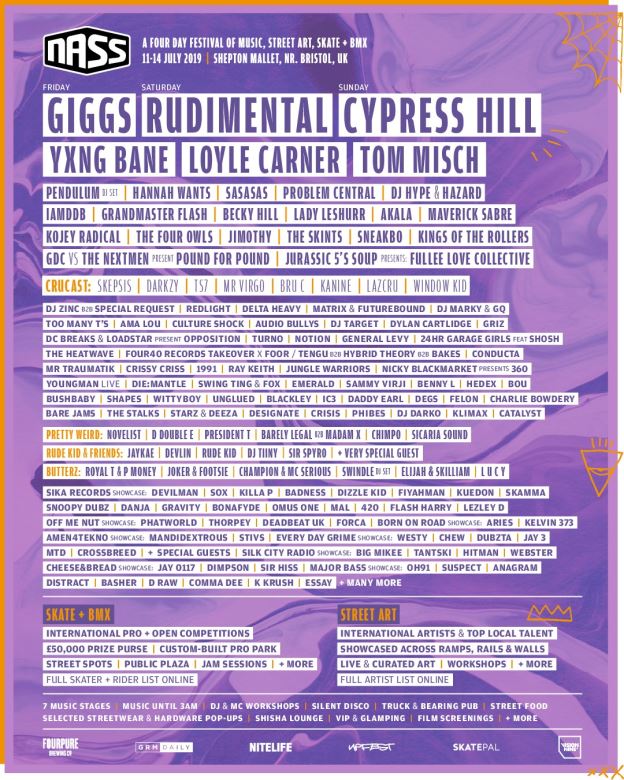 Tipped as East London’s hottest new rapper and fresh off selling out Brixton Academy, Yxng Bane will bring his “unique blend of melodic rap with dancehall, R&B and Afrobeats” to NASS on Friday. Also announced for Sunday is “one of the UK’s top independent producers”, Tom Misch, whose 2018 critically acclaimed debut album ‘Geography’ made it into the top 10 in the UK album charts. Joining Tom Misch on the mainstage on Sunday is Hackney born talent, Kojey Radical, who is famed for blending energetic and theatrical performances with deep and meaningful songs. NASS festival is the UK’s biggest celebration of music, street art, skate and BMX, taking place on Thursday 11 – Sunday 14 July 2019 at the Bath & West Showground, near Bristol. Tickets are on sale NOW from nassfestival.com

They join an incredible array of already announced acts including Friday’s headliner, influential UK rapper Giggs and Saturday’s headliner, BRIT-award winning collective Rudimental. Headlining Sunday are West Coast hip-hop icons Cypress Hill, who after making history as “the first Latino American hip-hop recording group to go platinum” and with 20 million album sales under their belt, have come to be known as one of the earliest and most prolific influences of hip hop. Expect their headline set to be filled with early hits such as “Insane In The Brain”, “Hits From The Bong” and “How I Could Just Kill A Man”.

This summer 30,000 fans will come together at the Bath & West Showground, near Bristol, to witness the world’s best BMXers, skateboarders, streets artists and fresh music talent alongside pioneers from every subgenre including grime, hip hop, garage, drum & bass, dubstep and more, creating the most exciting street culture event in the festival calendar.