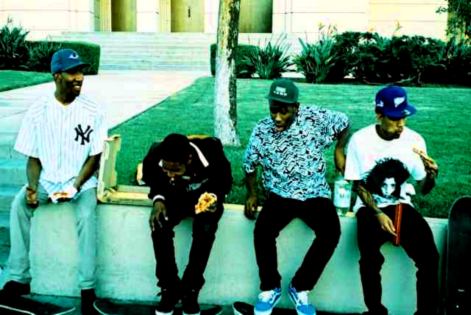 Gaymers Camden Crawl have now completed its massive roster of talent including Graham Coxon, OFWGKTA and many many more.

Fresh from their SXSW spectacular which warranted unprecedented audience response at the Austin, Texas festival and after which Diddy declared them "the future of the music industry", ODD FUTURE WOLF GANG KILL THEM ALL are set to travel to London for their first ever UK show at this year's Gaymers Camden Crawl on Sunday 1st May ahead of their Reading Festival appearance later this Summer.
Earlier in March, the LA based 10 piece collective aged 16 – 21 impressed to such a degree at MTV’s televised ‘Woodies’ to earn the group a huge internet upsurge currently translating massively on these shores. OFWGKTA are expected to incite frenzy with their new brand of hip hop to the Red Bull Bedroom Jam Arena at the Crawl on Sunday 1st May.
Also confirmed to appear at the 2011 Gaymers Camden Crawl are Camden Town’s very own GRAHAM COXON,  the legendary KILLING JOKE and, in support of their brand new album ‘Bread And Circuses’, Dundee’s THE VIEW. These additions complete the massive roster of talent, bar one very special unannounced guest, scheduled to appear at this year’s festival. The full line up is here.


In addition to this year’s extraordinary live music line up, the festival continues to develop the breadth of its daytime fringe arts festival.  Featuring a vast array of comedic talent, visual art and crafts exhibitions, spoken word and performance theatre, interactive events & games and, of course, live music, the daytime carnival of entertainment sprawls across an additional  thirty Camden Town venues for the weekend from 12 – 6pm both dates.
Immediately following the festival’s fringe programme of cutting edge arts during the daylight hours, the main thoroughfares of Camden will literally come alive with music.  Straddling more than twenty venues, including The Forum, Koko, Electric Ballroom, Dingwalls and Jazz Café, dotted across the high streets of Camden & Kentish Town, the Crawl evening schedule features over 200 of the best up & coming artists from the UK and abroad alongside seminal greats and very special guests. The evening line up kicks off from 5:30 pm and runs until the wee hours on both days of the weekend.