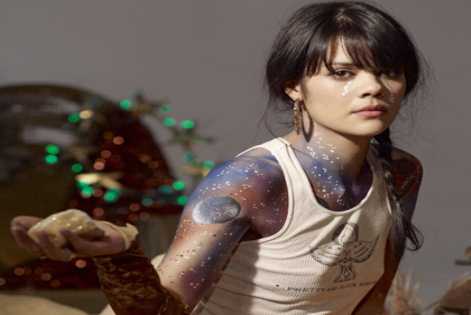 Lots of live acts announced for Bestival with Bat For Lashes, Ben Howard, SBTRKT, Roots Manuva, Alabama Shakes and many more plus UK Festival Exclusives from Sage Francis and Grimes

We’re having a wild old time down at Bestival HQ planning a long weekend of ferocious fun for this September at Robin Hill Country Park. We’ve already lined-up amazing treats, from our Saturday night headliners New Order and exclusive performances from The xx and Sigur Rós, to our brand new Amphitheatre performance space in the woods and Arcadia’s Mechanical Cabaret, not forgetting our Wildlife theme, a whole heap of gleaming new stuff and old favourite haunts galore, so it’s with great pleasure that we give you news of lots more lovely musical acts joining the bill and some ingenious ways to travel to our party paradise.
Rob da Bank says: “Hello my wild and wondrous friends… another raft of fine musical acts to tickle your ears come September. I’m delighted that Natasha Khan is bringing her Bat For Lashes guise back to Bestival, her shows are always otherworldly and plain incredible. Add in electronic soul wunderkind SBTRKT, UK hip-hop legend Roots Manuva (playing on his fortieth birthday no less!), the new king of folk Ben Howard, the incredible Alabama Shakes and American poet Sage Francis doing his only UK show of the year plus a very special Moodymann set playing in the Roller Disco complete with his roller disco crew flown in from the States and I’m ready to roll! Music aside, we are as usual ramping up the level of non-music related activity so if you want to take part in a nighttime ping-pong tournament in the woods, go tree climbing or join the Wildlife tug of war (first round will be Foxes vs Cockroaches) then check www.bestival.net  for loads more fun and games! See you in September”.
Making a very welcome return to Bestival is Bat For Lashes. A firm favourite round our way, the Mercury Prize and Brit nominated chanteuse is currently recording the follow up to her acclaimed second album Two Suns and we really can’t wait to see her again. Singer-songwriter Ben Howard will also be making an appearance with his rootsy folk stylings, which helped his debut album Every Kingdom to a top ten chart position, making him a certainty to captivate the crowds. Masked beat manipulator SBTRKT will be liberating your feet with his tribal post-dubstep melange, plus there will be dub, hip-hop and raga coated in the unique lyrical dexterity of Roots Manuva and the exalted Alabama Shakes, who have been getting everyone from the likes of David Byrne to Adele giddy with glee, will be demonstrating just why they’re so hotly tipped.
There will also be penetrating verse in a UK festival exclusive from much admired emcee Sage Francis, boundary beating pop and yet another UK festival exclusive from Grimes, Brooklyn flavoured electro-pop from Chairlift, dirty throbbing bass from Gesaffelstein, Danish punk action with Iceage, cinematic soul from BBC Sound of 2012 nominee Ren Harvieu, post-industrial, noisenik disco from Factory Floor, dreamy pop from Porcelain Raft, shimmering psychedelia from Toy and lo-fi loveliness from Kindness. And there are plenty more musical charms on offer from Dismantle, Dirty Beaches, General Levy, Top Cat feat. Sir Coxsone Outernational, Josh Kumra, Errors, Trailer Trash Tracys, Forest Swords, Stay+, Skinny Lister, Misty's Big Adventure, Ryan Keen, Nina Nesbitt, BIGkids, The Lovely Eggs, Alt-J, St Spirit, Charming, Shepherds and Seán McGowan.
That’s not all, as the turntable worrying skills of Detroit techno wizard Moodymann, Gallic electro-houser Kavinsky and dubstep jukester Girl Unit are all set to make appearances to hype up the dancefloor. And in the Ambient Forest there will be some suitably soothing sounds from the inimitable Mixmaster Morris, Chris Coco, Phil Mison and Pete Gooding.