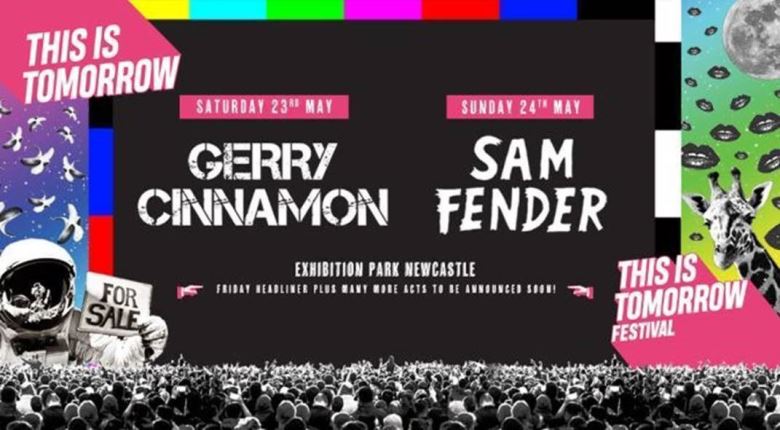 After welcoming over 30,000 revellers through its gates last year, This Is Tomorrow will return to Exhibition Park in Newcastle on 22nd-24th May 2020 and plays host to Sam Fender and Gerry Cinnamon, surely two of the UK's hottest acts right now.

The Scottish singer-songwriter Cinnamon, who sold 50,000 Hampden Park tickets within minutes of going on sale just two weeks ago, will headline the Saturday leg of This is Tomorrow followed by the hometown hero that is Sam Fender on the Sunday.

Reacting to today's announcement, Festival Organiser Steve Davis, said: “With Friday's headliners and the full line-up for all days still to be added, we're confident this will be one of the stand-out  live music events in the country for 2020.

“We have worked positively with both Sam and Gerry's teams to bring lineups that both headliners wanted, I am really happy with the end result. As ever I'd like to thank the Freemen of Newcastle, Urban Green and Newcastle Council for their can-do attitude when it comes to bringing large scale events to the city.

“We have new elements to add to the festival in 2020 and we are excited to see it develop, to have two of the UK's hottest talents headlining is really positive for the event.”

Cinnamon, (real name Gerard Crosbie), has a fiercely devoted Scottish fanbase and this enthusiasm is now spreading like wildfire across the border. Cinnamon’s knack for captivating storytelling armed with little more than his guitar continues to wow crowds throughout the land.

Cinnamon’s shows are something of modern-day folklore. The wild atmospheres are matched only by the droves of fans that come to witness him play live. With a lineup of even more irresistible acts performing on the Saturday, Gerry Cinnamon is certainly in great company.

The Sunday billing at This Is Tomorrow also promises to go down in Newcastle’s history books as it sees the return of a previous This is Tomorrow performer who has gone on to take the world by storm with his number one debut album, 'Hypersonic Missiles'.

With sold-out shows throughout the UK and Europe and a BRIT Award already in the bag, local hero Sam Fender has all of the credentials to headline the region’s largest music festival.

Sam’s combination of timely song topics and seamlessly produced alternative music has made him one of the UK’s most in-demand stars.

Since all of Fender’s upcoming hometown shows (four O2 Academy Dates and one Newcastle Utilita Arena date) have sold out, This Is Tomorrow is the perfect chance to catch the ‘Hypersonic Missiles’ artist live if you’ve missed out on tickets.

Sam will also be joined by another bounty of fantastic artists at This Is Tomorrow and organisers have confirmed that yet more major announcements - including news of the Friday headliner, shall be revealed soon.

Stephen Savage, assistant director events and special projects at Newcastle City Council, said: “After the success of the first This is Tomorrow festival we’re looking forward to an even bigger and better festival this time around.

“With local lad Sam Fender, fresh from doing the honours at the city’s Christmas lights switch-on, and the ever-popular Gerry Cinnamon, we’ve got an exciting start to the line-up and there’ll be many more big names to come.

“Newcastle knows how to put on an amazing show and I’m looking forward to a memorable weekend in May.”

James Cross, Chief Executive of Urban Green Newcastle – the independent charity responsible for the management, development and protection of Newcastle’s parks and allotments - adds: “Our parks are open to everyone so we’re delighted to be welcoming This is Tomorrow to Exhibition Park back, so music fans can enjoy three days of fantastic live acts in this special city centre location.

“This is Tomorrow forms part of Urban Green Newcastle’s year-long programme of events; helping bring communities together so they can discover our city’s amazing parks and green spaces.

“Events are an important part of securing the future of our parks and allotments too. The income we make from hosting This is Tomorrow in Exhibition Park will be reinvested across all the green spaces we manage so they continue to be vibrant, exciting, safe and welcoming places for people to visit and enjoy.”

Published on 08 December 2019 by Ben Robinson