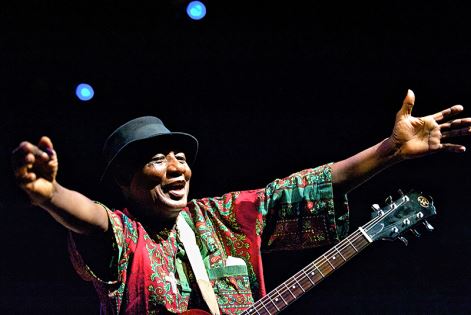 Tropical Pressure, have announced the first bands heading to Porthtowan this July. From Friday 17th to Sunday 19th the lush green site overlooking the sea will play host to some of the giants of Latin American, African and Caribbean music, programmin

The Twinkle Brothers are without doubt one of the greatest ever Roots Reggae bands. Formed by Norman and Ralston Grant in 1962 in Falmouth, Jamaica, they recorded several singles for producers such as Leslie Kong, Duke Reid, Lee "Scratch" Perry, Phil Pratt and Bunny Lee. Their first album 'Rasta Pon Top', released in 1975, and others such as 'Love', 'Praise Jah' and 'Countryman' are major piece of Reggae history. This will be the first time the band have ever performed in Cornwall, and no Reggae fan can afford to miss it! Ebo Taylor (Ghana/Strut Records) will be headlining the Roots Arena on Africa Day, Saturday 18th July. A true Afrobeat pioneer, this renowned guitarist, composer, arranger, bandleader, and producer has spent six decades refining his infectious, danceable fusion of Afrobeat , Jazz, Funk and Highlife. Joined on stage by a knockout 8 piece band comprising Ghanaâs most prominent musicians, the 78 year oldsâ set promises to be totally un-missable.

Founded by Trinidadian-Canadian songwriter Drew Gonsalves, Kobo Town take the intricate wordplay of classic Caribbean music and run it through a 21st Century filter, fusing the irresistible hooks and rhythms of traditional kaiso with the newer beats of dub, rapso, reggae, and zouk. Gonsalvesâ songs offer a raw and urgent poetry that express the love and anguish he feels for Trinidad, and his eight-piece band couch the messages in bouncing beats that elevate the spirit.

Heading up Latin America day will be Manteca, one of the "London's best exponents of New York style bugaloo" (Time Out), who will make you shake your hips with their unique style of Urban Latin Funk. Manteca spread their wings right across boogaloo, latin funk, cumbia hip hop and descarga-house, proving themselves to be at the cutting edge of the Latin scene.

United Vibrations will bring their highly original and inspiring 'Cosmodelic Afro-Punk' to the stage on. Born from Inner Space, they are on a journey of cosmic proportions, and music is their vessel. Other bands confirmed to perform during the 3 day event include The Fontanas, Phoenix City Allstars, Diabel Cissokho, Dojo, Malavita, 7Suns, Subajah, Dakar Audio Club, Shanty, L' Orchestre de Montplaisant, Gumbo Flyers, Two Man Ting and The Stalks.