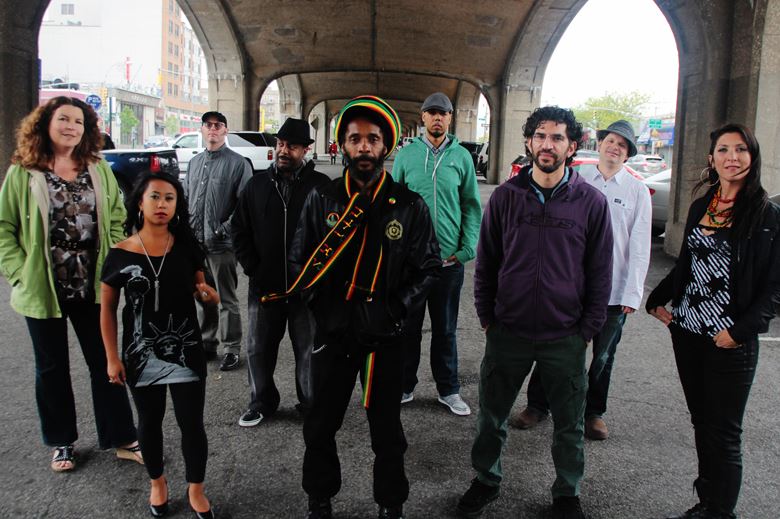 CHAGSTOCK FESTIVAL organisers have confirmed that Easy Star All-Stars are the latest major act to be added to their 2016 line up.

Neatly coinciding with Chagstock's own 10th anniversary, Easy Star All-Stars will celebrate the 10 years since the release of their iconic album ‘Radiodread’ – their beautiful, ska-reggae infused re-imagining of Radiohead’s album ‘Ok Computer’ – alongside a selection from their extensive back catalogue of dub-heavy re-workings of classic artists; from Pink Floyd (Dub Side Of The Moon) to The Beatles (Sgt Peppers Lonely Hearts Dub Band) via Michael Jackson (Easy Stars’ Thrillah).

Also recently added to bill are two Westcountry bands, both of which are making a name for themselves across the country. Weston-Super-Mare based ‘summertime-friendly folk-punk band’, The Leylines will get the Saturday main stage crowd well and truly dancing with their ‘fiddle-driven rabble-rousers that stir the soul’, and hotly-tipped Exeter trio Wildwood Kin – who recently toured with Chagstock favourite Seth Lakeman - will bring their unique Indie/Americana blood harmonies to the Marquee stage on Friday night.

Taking place on Friday 22nd and Saturday 23rd July, Devon’s much-loved, family friendly, not-for-profit event will feature the biggest and most diverse line up in its 10-year history.

Donovan is a legendary Scottish Poet, folk-rock & pop-troubadour who has been an essential part of worldwide popular culture 1965. Best known for his signature song, ‘Mellow Yellow’, Donovan has recorded more than 27 albums, and his 1967 hit, ’Sunshine Superman’ (featuring Jimmy Page on Guitar and John Paul Jones on Bass) was a US No.1 single.

Over the course of his 50-year musical career, Donovan has performed with legends such as Pete Seeger, Joan Baez and Bob Dylan, Led Zeppelin and Brian Jones of the Rolling Stones. He taught John Lennon & Paul McCartney the finger-picking guitar style, and performed on the recording of The Beatles’ ‘Sgt. Peppers Lonely Hearts Club Band’.

Saturday night at Chagstock will be headlined by none other than legendary post-punk band, The Stranglers. The Stranglers are one of the UK’s best loved bands, who have enjoyed a litany of hits across their incredible 42-year career, including ‘Golden Brown’, ‘No More Heroes’, ‘Peaches’, ‘Always the Sun’ and ‘Skin Deep’.

Also on the Chagstock 2016 bill are The Blockheads. Formed in 1977 to promote Ian Dury’s album 'New Boots and Panties'. Chaz Jankel, Norman Watt-Roy, Charlie Charles, John Turnbull and Mick Gallagher became known as 'The Blockheads'. Chaz composed 'Hit me with your Rhythm Stick' with Ian, which has sold more than 1 million copies to date, and reached No. 1 in the UK Singles Chart.

The theme for the wildly popular fancy dress day on Saturday will be ‘Legends’.

Set in 70 acres of farmland on the edge of Dartmoor, Chagstock is renowned for its stunning location, diverse line-up of artists and non-corporate, family friendly atmosphere. Chagstock showcases the very best music, food and entertainment that the Westcountry and the UK have to offer. Starting life as a small private party, Chagstock has now grown into a major fixture on the Westcountry festival circuit, selling out all 5,000 tickets for the last four years in succession. As introduced back in 2012, all children under 12 can attend the festival for free (ticket is required).

Last year’s festival was regarded by many as the best yet (“Chagstock has something special... other events should perhaps take note and try and emulate it” – efestivals) and featured memorable performances from the likes of Levellers, New Model Army, Seth Lakeman, Neville Staple, Molotov Jukebox and many many more

Simon Ford Chagstock Festival organiser says, “Donovan and The Stranglers are two legendary internationally renowned acts. To have them both grace the stage at Chagstock for our 10th Anniversary is an honour and a pleasure. Add to that the hundred odd other acts and activities taking place over the weekened and 2016 really is set to be a vintage year for the festival. As always, you can rely on Chagstock for a non-corporate vibe, family friendly atmosphere and loads of great and varied music, food and entertainment”