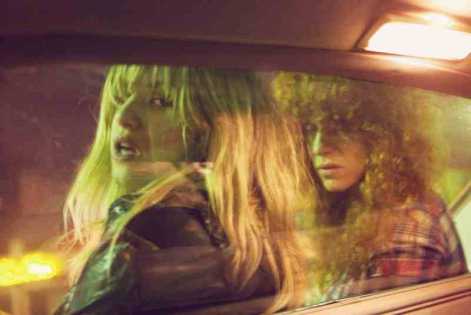 Californian duo Lindsey Troy (vocals, guitar) & Julie Edwards (drums) aka Deap Vally have unveiled the video for their brand new single 'End Of The World'
The single - which premiered as Zane Lowe's Hottest Record on BBC Radio One on Wednesday night - will be released on the 19th November. It follows Lindsay & Julie's debut single 'Gonna Make My Own Money', which came out earlier in the summer via Ark Records.
“Singing guitarist Lindsey Troy yowls like a wildcat while coaxing heavy blues rock riffs out of her guitar.  They are impossible not to love.” THE OBSERVER
The single release follows a hectic summer which saw the fast-rising LA duo headline three sold-out London shows and their first UK tour, and take in festival dates at Reading/Leeds, 1234 Festival and Latitude. 'End Of The World' was produced and mixed by Lars Stalfors (The Mars Volta), while the striking artwork for the single’s sleeve was designed by Milo.
“Think a hippie Karen O fronting Black Sabbath and you’re somewhere in the caustic, blues-riffing ballpark as these Los Angelinos.  A hollerin’, howlin’, hell-raising duo”. NME
Deap Vally return to the UK this November, joining The Vaccines on their sold-out UK and European tours. November also sees the duo tour Japan and SE Asia with Thurston Moore and Dinosaur Jr. UK dates are:
Thurs - 15th NOV - PLYMOUTH, Pavilions (with The Vaccines)
Sat - 17th - LONDON, Alexandra Palace (with The Vaccines)
Mon - 19th - LEICESTER, De Montford Hall (with The Vaccines)
Weds - 21st - MANCHESTER, Apollo (with The Vaccines)
Thurs - 22nd - LIVERPOOL, University (with The Vaccines)
Fri - 23rd - DONCASTER, Dome (with The Vaccines)
Sun - 25th - GLASGOW, O2 Academy (with The Vaccines)
Mon - 26th - GLASGOW, O2 Academy (with The Vaccines)
Tues - 27th - NEWCASTLE, O2 Academy (with The Vaccines)
Thurs - 29th - BIRMINGHAM, O2 Academy (with The Vaccines)
Fri - 30th - BOURNEMOUTH, O2 Academy (with The Vaccines)
"two bad ass Californian girls who sweat liquor-bar rock and swig from kegs of attitude.... (Deap Vally) take the Black Key’s grit and shoot it from Tony Iomi’s Blunderbuss towards DZ Deathrays..." The Independent Online
A Little More About Deap Vally...   Deap Vally break blues down to its simplest, most fundamental form: beat, melody, and meaning, while the duo’s scorching live shows are fast becoming the stuff of legend.  Unlikely as it may seem, the pair did actually first meet at a needlework class, just last year. Bonding over their crochet hooks with a love of the blues, first demos and videos of the girls’ live shows have been cropping up online with increasing frequency over the past few months, Filter Magazine invited the band to perform at their Coachella party, and they even caught the ears of one Josh Homme, whose Eagles of Death Metal invited the girls to open for them in LA.  The summer’s UK shows grew the whispers that these girls were something special into a more fitting roar, and Island/Communion won the race for their signatures.  Between tour dates, the band are hard at work on tracks for a debut album, to be released in 2013.

Published on 07 October 2012 by Wayne Feltham