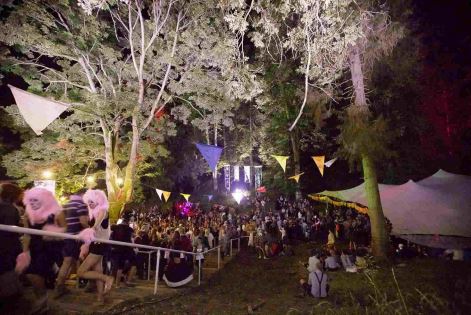 THE BOX, London’s exclusive destination for late-night entertainment and house of carnal cool, will be heading out into the wild for the very first time as it makes its UK festival debut at the award-winning Wilderness.

Renowned for its brand of innovative live theatrical performance, The Box will be joining the festival’s Late Night Revelry line-up for an evening of decadence and debauchery.
The capital’s ‘Theatre of Varieties’ is surrounded in mystique and mystery - famed for its closed-doors policy,but will be treating festival-goers to an incredible and unforgettable night of after-dark antics, during their takeover of the Secret Valley on 9th-11th August
Sophie Moss, Events Director of The Box, comments: “We are delighted to be joining forces with Wilderness Festival. We have decided to venture into the wild for the first time to give more people the opportunity to truly experience an evening that they will never forget. THE BOX is internationally renowned for its unique brand of entertainment and theatrical experiences, making it the ideal fit for Wilderness Festival's exciting 2013 line-up.”
Festival organisers Tim Harvey, Jim Whewell and Jo Vidler say: “As festival organisers, we’re really excited to have such a coup for the festival scene - Wilderness is a festival of experiences and with THE BOX joining the Late Night Parties this year, Wilderness after-dark is set to be a night of electrifying entertainment and revelry for guests. Not since the infamous days of 1970s New York has a club captured the nocturnal imagination of the great and the bad - THE BOX have firmly established themselves as THE most fun night in town. We cannot wait”
Presented by Secret Productions, the producers of the Secret Garden Party, the much-lauded late night parties also feature alongside THE BOX, exhilarating sets from The Correspondents, Psychemagik, and Future Boogie amongst many others, with party aficionados Rumpus bringing carnival-esque magic to the weekend, plus performances from The Artful Badger and Feast of Fools.
In its third season of arts and escapades and set against the beautiful backdrop of Cornbury Park, the Late Night Parties make up just one element of Wilderness festival’s offering. Continuing with its unique program of time-honored arts, this year’s line-up includes some of the most admired visionaries in music, food, theatre and the literary arts as well as a dynamic line-up for its carefully curated main stage.
The festival has also been extended to four days and will now open on the Thursday.
Weekend Tickets: £139
Family Weekend Tickets: £335
Children aged 10 and under go free