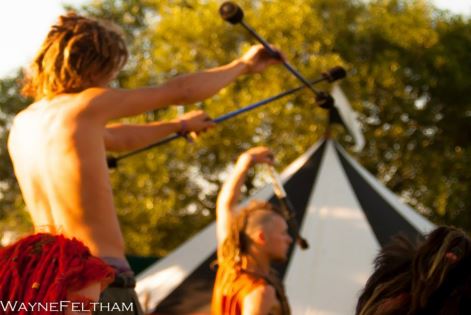 Jungle, the celebrated London funk collective, and probably the hottest band in the UK right now, are set to join the Secret Garden Party 2015 line-up and more added artists...

Described by Time Out as a band who ‘make electronic music with a human heart, marry underground cool with main-stage appeal, and do it with vision and conviction,’ Jungle released their self-titled debut album through XL Recordings in the summer to widespread acclaim.
Kate Tempest, who really needs no introduction, is officially added to the line-up this time round having busked at the Secret Garden Party a few years ago. Winner of the Ted Hughes Poetry Award for her narrative poem, ‘Brand New Ancients,’ she was also nominated for the Mercury Prize for her album ‘ Everybody Down.’  She will be performing her new poetry collection ‘Hold Your Own’ along with the current album.
French ensemble extraordinaire and long-time Garden Party favourites also join this first wave of bands. Renowned for their outstanding live shows Caravan Palace bring together elements of jazz, gypsy and dance music in a vibrant, upbeat and exhilarating fashion.
Rising stars Jack Garratt and Marika Hackman are also confirmed along with Flyte, Iyes, Jagaara, Elder Island and Menace Beach. New artists, who all possess excitingly unorthodox and distinctive styles.
Many more to be announced soon....

Published on 06 December 2014 by Wayne Feltham