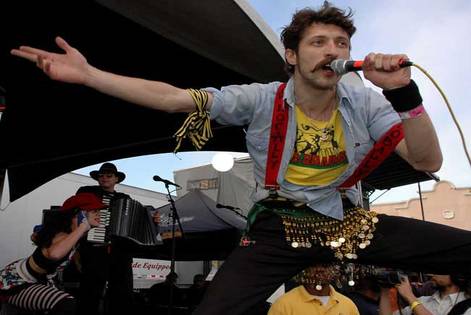 The growing suspicion that this summer’s WOMAD Festival is going to be a classic is further strengthened by the announcement of the latest additions to July’s bill.

First off, welcome to the bandstand, none other than Booker T Jones – soul music godfather, leader of the MG’s and organist supreme. This is the man who gave the world Green Onions, Time Is Tight and, most famously (to cricket fans at least), the irresistible sunshine grooves of Test Match Special theme tune Soul Limbo.

You can bet your bottom rouble that the hallowed turf of Lords or The Oval will never ever resonate with the sound of New York’s Gogol Bordello. Always an extraordinary spectacle, these gypsy punk pirates will be making their Charlton Park debuts, filling the air with the weekend’s most raucous, anarchic sounds.

A more stately, but no less thrilling, affair is AfroCubism, the wonderful Malian/Cuban crossover project that’s had critics and punters purring with approval. This all-star, cross-continental meeting of minds will be a red-letter moment for many at this year’s Charlton Park. And while we’re talking West Africa, an appearance from Ebo Taylor is sure to also be among the highlights. This Ghanaian bandleader, an old student pal of the mighty Fela Kuti, is one of the forgotten men of Afrobeat and highlife. Expect that wrong to be righted come July.

And, being the festival that travels furthest in pursuit of music excellence – one that leaves no stone unturned, no CD unheard – WOMAD is always happy to handle the introductions to music you’ve yet to encounter. So set your audio sat-navs in the direction of these future favourites: Samuel Yirga, a young Ethiopian pianist with an extraordinary improvisational flair; singer Nathalie Natiembe whose intense, musically impure sound mirrors the ethnic complexity of her native Reunion Island; the rhythmic elasticity of Indian percussive force the Dhols of Jaipur; and the spellbinding lute-and-flute combination of Japanese duo Shunsuke Kimura x Etsuro Ono.

But, while scouring its well-thumbed world atlas, WOMAD also never ignores the treats and treasures sat on its own doormat. From London Town, we’ve got the commendably mongrel sound of Alejandro Toledo and The Magic Tombolinos, a five-piece carrying Argentinian, Portuguese, Italian and Costa Rican passports who cross-pollinate their gypsy sound with jazz, tango and punk.