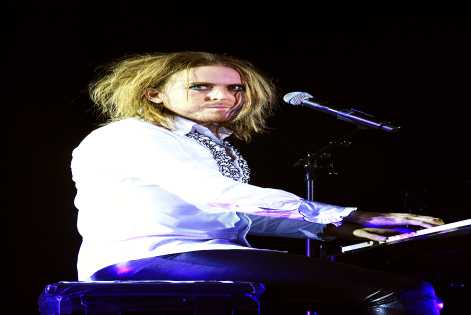 The Eden Sessions is welcoming comedy back in 2012 with musical comic Tim Minchin who will be headlining a one-off day of humour at the home of the famous Biomes on Saturday June 23.

This unique show is part of the London 2012 Festival, a spectacular 12-week nationwide celebration from 21 June and running until 9 September 2012 bringing together leading artists from across the world with the very best from the UK. Tim Minchin’s Eden Session is the first London 2012 Festival event in the South West.

Tim, who was born to Australian parents in Northampton but grew up in Perth, Western Australia, is a pianist and comic songwriter who is recognisable by his distinctive wild hair, heavy eye make-up and tendency to perform in bare feet.

His shows deal with religion, taboos and society in general and involve him performing songs and poems interspersed with short stand-up sections. He has released six albums and three live DVDs, including recordings of his most recent arena tour Tim Minchin and the Heritage Orchestra.

Tim has won a number of awards, including the prestigious Perrier Comedy Award for Best Newcomer in 2005 and the Best Music or Variety Act at the 2010 Chortle Awards.

He also wrote the music and lyrics for a stage version of Roald Dahl’s seminal novel Matilda, produced by the Royal Shakespeare Company, which is currently playing to critical acclaim at the Cambridge Theatre in London’s West End.

Comedy shows at the Eden Sessions in previous years have been headlined by Bill Bailey and Al Murray.

Martin Williams, Eden’s Marketing Director, said: “It’s great to see comedy back at the Eden Sessions and Tim Minchin is a great addition to our line-up. Like our first comedy headliner Bill Bailey, Tim combines music and stand-up to brilliant effect. He is one of the best comics around and we can’t wait to see him here.”

Eden’s Inside Track scheme returns for the 2012 Eden Sessions. Members get a guaranteed pair of tickets to each show, with seven days to decide whether to buy them before they go on general sale. As well as priority booking and the latest Sessions news, Inside Track also gives members the chance to win exclusive Eden Sessions prizes.

For more info on tickets go to Eden Sessions