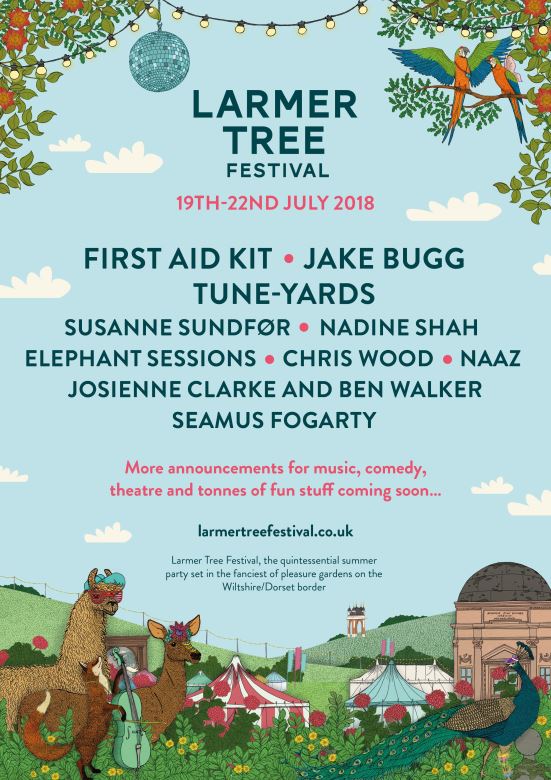 First Aid Kit and Jake Bugg have been confirmed to headline the main stage at Larmer Tree this year. The Festival, which takes place 19th - 22nd July 2018

In recognition of the centenary of women's suffrage (6th February 2018 marks the centenary of the first big win for suffragettes, with women over the age of 30 gaining the right to vote), Saturday's main stage at Larmer Tree will be fronted by some amazing women in music. Swedish sister act First Aid Kit will be headlining, fresh from the recent release of their critically acclaimed album 'Ruins'. They'll be enrapturing the crowds with their very own blend of country-folk-pop, perfected wistful melodies, empowering vocals and their signature flawless harmonies.

They'll be joined by Jake Bugg, who at just 18 years old supported the Rolling Stones and Stone Roses with his style of skiffley blues.  Now 23 years old, you can still hear influences of his adolescent love of Don McLean, the Everly Brothers and Johnny Cash. Since releasing his debut album in 2012 the young troubadour has seen a meteoric rise to success, with hits such as 'Lightning Bolt' and 'Slumville Sunrise’ garnering support and airplay internationally. Having released his fourth studio album 'Hearts That Strain' in September last year, Bugg’s time in Nashville Tennessee, certainly shines through in this new album – it is warm and glowing, perfect listening for summertime in the garden.

Joining them will be musical activists Tune-Yards. Fronted by the enigmatic Merrill Garbus, known for pushing herself as a musician and an artist with her genre-popping, ever-evolving music, Tune-Yards live shows are unforgettable - delivered with ecstatic energy, mashing-up pop, hip-hop, soul, folk, rock, 80’s house, African beats, and Caribbean music.

Also announced are Susanne Sundfør, Nadine Shah, Elephant Sessions, Chris Wood, Naaz, Seamus Fogarty and Josienne Clarke and Ben Walker. With six out of the ten acts eitherwomen or female-fronted, this marks a welcome turnaround to the often male-dominated line-ups, certainly important in the centenary celebration of suffrage.

Creative Director Sarah Dennehy says "It’s an honour to be involved with this longstanding, independent, super cool little Festival. And stoked to announce our first wave of acts; but there’s much more to be announced over the coming months, with one or two surprises!"

2018 will also see the exciting addition of the brand new Larmer Spa to the Festival. Kernow Springs will be bringing their wild spa onsite, where Festival-goers will be able to indulge in hot tubs, a sauna yurt, and a cosy Bedouin chill out lounge complete with huge bean bags, rugs and throws which will sit along-side therapists and holistic workshops.

After a year-long hiatus Larmer Tree Festival is back for its 27th year from 19th - 22nd July 2018. The event has cemented itself as one of the UK's most loved and long standing festivals thanks to the combination of its breathtaking location, outstanding line ups and breadth of activities on offer. With an eclectic line-up, not to mention a brilliant comedy stage with both established and emerging comedians and a plethora of family activities and more, the Festival's reputation as being one of the highlights of the summer is well-deserved.

Published on 06 February 2018 by Ben Robinson