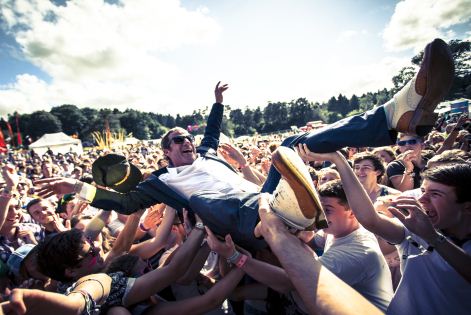 Tickets are now on sale for Blissfields 2013, which next summer will be celebrating all things "FILM". A new website was launched at 4pm today to explain a little more behind the 2013 event, and host image galleries and videos from the past 12 years

Blissfields Festival is pleased to unveil it’s theme for 2013. Under the banner ‘The Director’s Cut’, the award winning Hampshire festival will be celebrating all things film in it’s 13th year, from the early talkies to VIP Hollywood parties. Expect a weekend full of red carpets, interactive games, popcorn-throwing dance-offs, film screenings, the best soundtracks, visual treats, hidden treasures and all the usual fun that Blissfields has become synonymous with.
You better be ready to glam yourself up, slap on the makeup and get ready for your close-up in the limelight at Blissfields. Do with it what you will as far as fancy dress goes, but we’re hoping to see as many Monsters from the Black Lagoon as we are James Bonds and Marilyn Monroes.

“Not only are we inviting you to join in with fancy dress but we also have an independent film festival planned on a new stage, exclusive premiere party shenanigans, film crew fun with Tracksuit and Tie (who hosted the 2012 Sports Day activities), and late night showings of your favorite movies, as well as stalls, installations and other activities inspired by the silver screen, photography and TV.”
- Paul and Mel Bliss
IT’S NOIR OR NEVER:

Tickets are on sale now via the festival’s brand new website at www.blissfields.co.uk, priced at £75.00 for an adult’s full weekend camping ticket and £50.00 for a youth ticket.

Tickets at this Tier One price are limited, and once sold out tickets on the Tier Two price will be available. This is to offer tickets at a lower price around Christmas and reward those who get in early. Offers on family tickets and group discounts are also available.

For the first time Blissfields will also be offering a payment scheme for ticket buying, with the ticket price being split into an initial payment and three further monthly payments, helping our festival family to budget for the weekend over a number of months.

FIELD OF DREAMS:
Over the past 13 years, Blissfields has grown from a family gathering in the garden of founders’ Paul and Mel Bliss into one of Britain’s most celebrated small festivals, claiming the BEST SMALL FESTIVAL 2007 award at the UK Festival Awards. It remains a family-run and totally independent 2,500 capacity festival that takes all of the best bits from the big festivals, and scales it down into an intimate, friendly, beautiful setting, dominated by parkland trees, just outside of Winchester.

The first live music acts for 2013 will be unveiled early next year.

Published on 05 December 2012 by Ben Robinson