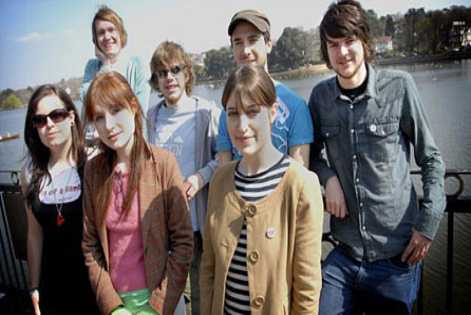 The Deer Shed Festival music line-up has expanded from the format of the first two years – year three will see the Main Stage now in action each day instead of just Saturday and there is the new Lake Stage. The festival team are very excited about the whole thing which is quite understandable.
The first ever Friday night Main Stage headliner to be announced for Deer Shed Festival is, drum roll please, Saint Etienne. These titans of pristine pop moments release their first album for seven years in May, ‘Words and Music By Saint Etienne’, restoring everyone’s faith in a genre that Saturday night telly has done its best to ruin over the last decade. The Main Stage bill on Friday is completed by the dreamy, US west coast via Belfast, shimmers of Cashier No 9 and Club Smith who have just finished touring with Kaiser Chiefs.
Janice Graham Band are reclaiming ska for a new generation.  Sharp lyrics about love, life and murder, this unpredictable band of four lads from Manchester are on the cusp of greatness and play the In The Dock Stage on Friday. Opening the stage ahead of them are Moody Gowns, a quintessentially British band in the vein of Ian Dury and The Blockheads. Previously announced Dutch Uncles complete the In The Dock Stage line-up for Friday – clearly the place to be for lovers of unconventional Brit-indie greatness at Deer Shed Festival 3.
The final band to be announced today for Friday’s bill is The Glendale Family. Returning to Baldersby Park for the third year, it’s fair to say they are the Deer Shed Festival house band. Playing the new Lake Stage on the first day of the festival, they’ll also be found in charge of the late night good times, curating and playing in the After Hours Lounge Bar.
Saturday’s Main Stage line up is completed by a trio of distinctive bands. Los Campesinos! bring their glockenspiels, big beats and boundless energy to North Yorkshire for the first time, playing before headliners Villagers.  The Staves will serenade the Main Stage crowd mid-afternoon with their sibling harmonic perfection and Washington Irving open up with beautiful Scottish indie-folk-pop.
Further acts for Saturday include the ethereal singer-songwriter Paul Thomas Saunders who will play his sublimely haunting and reverb sodden songs on the In The Dock Stage. The Lake Stage line-up will be headlined on Saturday by Leeds folk quintet Ellen and the Escapades. Joining them will be the Buddy Holly-esque The Lost Brothers, the beautiful and soothing Pale Seas and North Yorkshire lass and BBC Introducing darling Pip Mountjoy.
There was a lot of whooping in the Deer Shed Festival office when the next act was confirmed. Human Don’t Be Angry is the newest project from the obscenely talented Malcolm Middleton and this noodling guitar, looped lyric offering continues the high level of brilliance we’ve come to expect. Middleton plays before Main Stage headliner Cherry Ghost on Sunday. Also taking to this stage will be singer-songwriter Rae Morris with her distinctive voice and piano talent.
That’s it for now. The final third of the music bill will be announced soon plus details of cabaret, comedy, cinema, theatre, workshops and the all-important theme for Deer Shed Festival 3. It’s going to be a BIG (clue alert!) one this year.