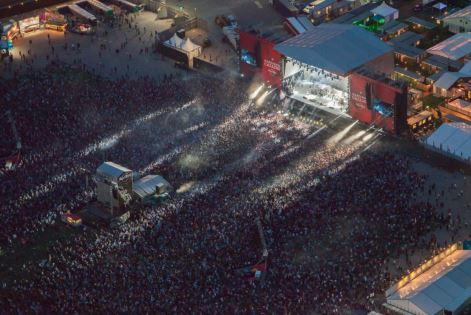 This weekend Kasabian, Bruce Springsteen, Black Crowes, Paul Weller, Miles Kane and a host of other acts all took to the stage at Hard Rock Calling, marking the first concert to be held at the Queen Elizabeth Olympic Park since the 2012 Games.

As the sunshine beamed down, Hard Rock Calling saw a packed crowd of over 80,000 enjoy a weekend of music across three stages. Saturday’s bill saw Paul Weller, Miles Kane, Twin Atlantic and Kodaline play some of their finest sets on the main stage, while Klaxons, Tribes, The View and The Cribs all ripped up the Pepsi Max Stage.
The crowds were roaring for the evening’s headliners Kasabian, who opened their 17-song set with ‘Days Are Forgotten’, before blasting through ‘Shoot The Runner’, ‘Reason Is Treason’, ‘Club Foot’, ‘Empire’, ‘LSF’, and finishing with a mind-blowing version if ‘Fire’ that got the crowds going wild.
The sun continued to shine down for Sunday’s line up. Black Crowes, Alabama Shakes, Zac Brown Band and Flamin’ Groovies were just some of the names that graced the stage.
Sunday night headliner Bruce Springsteen returned to Hard Rock Calling in a highly anticipated performance, as he belted out ‘Born In The USA’, ‘Jungleland’, ‘Bad Lands’, ‘Born To Run’, ‘Wrecking Ball’ and a rare live performance of ‘I’m On Fire’ to a packed crowd. Bruce was joined on stage during ‘Dancing In The Dark’ by the first of his special guests – his mum and sister. He was later joined by the Zac Brown Band for an amazing version of ‘Tenth Avenue Freeze Out’.
Hard Rock Calling attracts some of the worlds biggest names to its stage, with previous headliners including The Who, Paul McCartney, Eric Clapton, Neil Young, Stevie Wonder, Aerosmith, Peter Gabriel, Pearl Jam, The Police, The Killers, Rod Stewart and Bon Jovi.