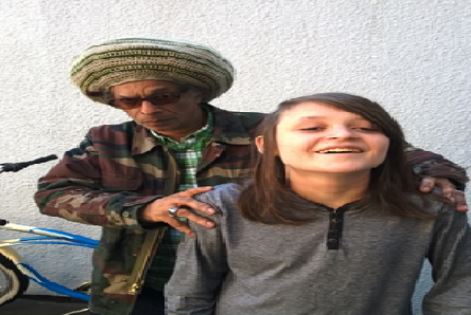 “The downside of affordable technology? Mediocrity.” spits Don, as if ‘mediocrity’ is a poisonous disease. “People like Joe Strummer had to scrape, scrape and steal to get a guitar. Once he’d done that, he had to go through the same process to get an amp. By the time he’d gone through that, he really wanted to play guitar... ...the internet has removed the pain and the struggle. That is part of the creativity.”
“I’m not a Luddite”, Don reassures me for the second time, “basically what I’m saying is; technology’s great, people are sh*t.”
Don, most definitely isn’t contributing to mediocrity. He is an icon, but one who is happy to open the door for a new generation of young rebels. “As a broadcaster, I’m duty bound to push things forward.” Don tells me, and he does each week on his BBC 6 Music Show (Sundays, 10pm).
“They originally got me on to do a reggae show, but I said... ...the world’s a big and beautiful place. I pretty much embrace it all.”  Last week’s playlist included Pink Floyd (his crucial vinyl), Son of Dave (harmonica fuelled electro-blues), Credit to the Nation, Sujfan Stephens and PJ Harvey. This eclectic mix embodies what Don does, the spirit of Culture Clash – a phrase he coined to describe the coming together of two movements in social unrest, a ‘Punky Reggae Party’, if you like. The famous Bob Marley song is even rumoured to be inspired by Don.
Don is passionate about music that reflects cultures. “From the 50’s right through the 20th century we had Teds, Rockers, Mods, Skinheads, Soulboys, Punks, Two-tones, Rave.” But then, Don’s usual lit-up face drops into a dull disappointment. “If you look post-20th century, it all peters out. It all flatlines.”

Don and I take a minute out of the heavy conversation to play fantasy festival organizing. He tells me how if he ever put on a festival, it would reflect the culture clash he speaks of. “I’m black, but I’m British. What I’m into reflects the duality of my existence. If I put on a festival, it would definitely be in that vein... ...At my festival the toilets would be clean.”
I mention how this would suck a lot of his budget up, but when speaking about one of his favourite festivals Glastonbury, Letts’ seems less bothered about the bands, and more about the people.

“Glastonbury’s undoubtedly special. The bringing together of that many people. I go to Glastonbury, but I don’t even go to see the bands. It matters that the bands are the means to which these people come together. But to see that many people come together, get-a-long, basically self-police themselves... ...there’s the odd drunken stumble but it’s not swamped by police and the people basically work shit out. That’s very inspiring to see.” Don does also say “I do like festivals where you can do a 360 and see an exit. But I guess Glastonbury’s the daddy of them all and will remain so forever.”
These subcultures are often told on a late Friday night BBC4 documentary; however when I mention all the punk films being made at the minute, even Don says “I’m sick of it.” Which is ironic, considering he made his name by making titles such as the ‘Punk Rock Movie’ (1978). “I wouldn’t be sitting here if it wasn’t for the whole punk D.I.Y ethic. There’s a continuity, a linear, a tradition; I didn’t come out of a void... ...It’s about passing that energy and the creativity on to give you something special to push things forward. I grew up listening to music that was about changing your mind; not changing your sneakers.”
A few years ago Don was asked to make series of televised films for Fred Perry’s side music-film crossover project dubbed ‘Subculture.’  Despite criticizing corporate sponsorship in music Don accepted.
“How can I take these people’s money and not be sucking the Devil’s d*ck?” contemplates Don, leaning across the table, passionately fired-up as ever. “It’s down to the integrity of the individual, whether he can maintain his principles and morals, while taking their money.”

Don is a filmmaker, however in the modern age he has to take funding from brands to keep creating. He does see some benefits to working with brands though. “With the record companies and TV stations, they give you the money and they don’t leave you alone... ...I’ve found working with brands more liberating.”

You can catch Don spinning your perfect summer soundtrack at multiple festivals including Glastonbury, Latitude, One Love, the return of London festival Land of Kings and many more yet to be announced.
At the beginning Don, told me “I’m not a legend, I’ve got an Oystercard and legends don’t have Oystercards.” But to me, Don is a legend from his films and his late night 6 Music show celebrating culture clash to the fact he’s got an Oystercard and doesn’t quite realize how special what he does is.
FAVOURITE FESTIVAL RECORD: NIRVANA – SMELLS LIKE TEEN SPIRIT