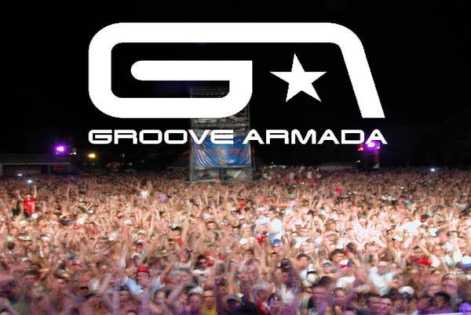 Groove Armada return to Lovebox for a world exclusive show plus Crystal Fighters, Maverick Sabre and many more..

LOVEBOX FESTIVAL co-founders Groove Armada, will make a sensational return to the live arena this June for a worldwide exclusive. The show promises to be one the festival’s most spectacular productions ever as one of the world’s best loved electro groups return to Victoria Park for a never-to-be-seen-again show. The Dance Masters will deliver a full on live extravaganza featuring very special guests guaranteeing to have the whole of Victoria Park bouncing along and screaming for more.
The electronic extraordinaires, who are well established as one of the planet's most iconic and biggest selling dance acts, are set to get Lovebox spinning with a swirl of their much-loved classic tracks, mixed in with their newest material marking a return to the spirit of the warehouses where the GA project first started, and a continuation of their darker sound. Out just last month, GA’s NO KNOCK EP, sees them stop off at underground label Hypercolour for their 4 tracks of analogue funk and bass-drizzled house with a decidedly old school nuance. The live set can only be described as, ‘you have to see it to believe it’.
2012 is the year that Groove Armada will go down in London’s music history books as they bring their biggest ever set to date to what’s close to their heart. What better way to celebrate a decade of love with what will be the most talked-about and supersonic set from an act that truly represents the past 10 years of Lovebox.
Commenting on their performance, Tom Findlay says: "2002. Clapham Common. We'd decided to do an outdoor live gig , turn it into a bit of a party. It had sold out in 4 minutes. Which is when the chaos started. Enough mates to work the door, enough loo roll for the ladies, enough generators, lights, sound and action to make it the kind of party a London common had never seen. Ten years later and our love letter to the capital had become a 3 day weekend for 50,000 people. From Blondie to Hospitality, Roxy and Grace to Rinse and Horsemeat Disco, Duran to Sub Focus, Del Rey to Snoop. Talking to the regulars about a Decade of Love, it was clear that GA Live had to make a return. Those 6 years we closed the Saturday were iconic Lovebox moments. Unlike 2002, we can get ready for the 10th birthday gig without having to build the fence at the same time."
The Saturday spectacular – along with Groove Armada and already announced headliners Friendly Fires – welcomes rising star Rita Ora to the outdoor stage. The British songstress, whose track with DJ Fresh hit number one in the UK, will bring her music to life when she performs her latest material including current hit “R.I.P”.
Ahead of her performance, Rita says: ""I'm really excited to be performing at Lovebox this summer and celebrating the 10 year anniversary alongside some incredible artists"
Also joining the Saturday will be Stooshe, the 3 girl Brit group who achieved a top five hit with their first single "Love Me" which featured US rapper Travie McCoy; Delilah with her unique look and sound that epitomise the true essence of multi cultural London, will share her mind-blowing music with Lovebox; Maverick Sabre the rising star who is back once again, generating an almighty noise with his gritty yet soulful voice, will leave festivalgoers hooked; and Dot Rotten the established and hailed grime MC and producer from South London, who will be Saturday showcasing his emotive beats.
Talking about his performance, Maverick says: "I'm really looking forward to performing at Lovebox 2012, last time was crazy and I'm sure this year will be even better seeing as it's the big 10 year anniversary."
If that wasn’t enough, just announced for the Friday main stage is one of the hottest names on the underground grime scene, Devlin. Keeping it local the Dagenham born MC promises to bring his distinctive gritty lyrics to Vicky Park and get ‘grime’ and dirty with the crowd.
Sunday’s Out & Out Fierce draws to an exciting climax with the addition of an East London five piece that just like Lovebox’s eclectic nature fuse traditional Basque folk with an explosion of heavy dance rhythms and synthesizers.  You can catch the Crystal Fighters as they play the main stage along with Grace Jones, Lana Del Rey, Chic and many more.
To keep the 10-year celebrations alive all night long, festivalgoers are invited to party late into the night as XOYO (Friday) and Ministry of Sound (Saturday) host the official Lovebox after parties. With big, big line ups festivalgoers are in for a treat long after the gates have closed.