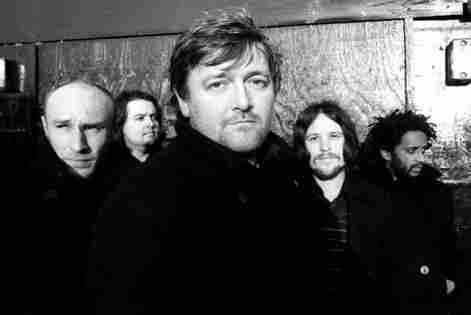 The Live From Jodrell Bank series sees some of the most innovative artists performing in this unique and dramatic setting, marrying science and music and bringing the audience superlative sounds from earth and beyond.

Tickets for Elbow’s show on 23rd June at Live From Jodrell Bank sold out in a remarkable 90 minutes and the band have confirmed their hand-picked supports for this very special show.  The North East’s finest musical sons Field Music have a unique talent for taking a range of different influences and creating their own, unique pocket symphonies.  Ivor Novello award winners Cherry Ghost are some of the best contemporary songwriters around whilst Lianne La Havas will be showcasing the folk and soul of her much anticipated debut album ‘Is Your Love Big Enough’.  Willy Mason’s lo-fi, alt-folk completes a day of outstanding musical entertainment.
Mercury Music and Brit Award winners Elbow, formed in 1991, have five top 20 studio albums under their belt including the phenomenal multi platinum The Seldom Seen Kid and most recent Build A Rocket Boys. The band have also been commissioned to compose the BBC 2012 London Olympics theme tune.
“I am a space nut. My cat is even named after the woman who discovered pulsars, and Patrick Moore does all the trailers and announcements for my 6 music radio show. So as you would imagine, playing alongside the local icon of space exploration fills me with cosmic glee.” - Guy Garvey – Elbow
The following day, Paul Weller and supporting cast will ramp up the volume at this iconic setting.  Modfather Paul Weller is an internationally acclaimed star whose song-writing is a huge part of British Culture, throughout his musical career from his early days in The Jam, to his much loved hits with The Style Council, as well as a solo career spanning over 20 years. With Brit Awards, Mercury Nominations and an Ivor Novello Award, Paul Weller has provided music lovers with hits such as The Changing Man, You Do Something To Me and Wake Up the Nation and will also be performing tracks from his new number 1 album ‘Sonik Kicks’.
"I’m excited to play Jodrell Bank, it’s always good to perform in unique places and this will be the most unique of them all!  It’s going to be a great show in a great space-age setting," – Paul Weller

Graham Coxon has been confirmed as the main support for Paul Weller’s show at the Jodrell Bank observatory and the Blur lead guitarist and solo artist is a welcome addition to what is shaping up to be a spectacular bill.  Graham releases his highly anticipated 8th solo album ‘A + E’ on 2nd April and his records mix alt-rock, folk and lo-fi with consummate ease.  Graham Coxon is revered by his musical peers being described by Noel Gallagher as ‘the most gifted guitarist of his generation’ and has previously collaborated with Paul Weller on the single ‘This Old Town’.


‘Looking forward to catching up with some old chums at the Jodrell Bank Observatory, guitars akimbo!’ – Graham Coxon

Baxter Dury showcases the expertly constructed psychedelic pop joy of his ‘Happy Soup’ album.  His sharp portraits of odd ball characters and hook laden storytelling have marked him out as a wordsmith of some renown and his self professed ‘seaside psychadelia’ is a guaranteed crowd pleaser.

Collaborators of choice to the A-list, Little Barrie have also been added to a sonically charged line up.  Having worked with Primal Scream, The Chemical Brothers, Spiritualized and Paul Weller himself, the band’s lead guitarist Barrie Cadogan is often referred to as the greatest guitarist of his generation and his band bring their undiluted rock n’ roll swagger to Jodrell Bank for what is set to be an unforgettable live performance.
The Live From Jodrell Bank series sees some of the most innovative artists performing in this unique and dramatic setting, marrying science and music and bringing the audience superlative sounds from earth and beyond. The bands will even project visuals onto the 76 metre Lovell telescope.
Before the spectacular evening concerts and throughout each day, attendees will be able to participate in a fantastic range of hands-on experiments and workshops on site at Jodrell Bank. With full access to the magnificent Discovery centre included in every ticket, this is a great chance to find out more about the mind-blowing research happening at Jodrell Bank. Explore the wonders of the universe and find out for yourself why stargazing has enjoyed a massive resurgence in the past few years.
For over five decades, the giant Lovell Telescope at Jodrell Bank has been part of the Cheshire landscape and an internationally renowned landmark for astronomers.  Since the summer of 1957 it has been exploring the depths of outer space in a quest for knowledge. It remains one of the biggest and most powerful radio telescopes in the world, spending most of its time investigating cosmic phenomena that were undreamed of when it was first conceived.