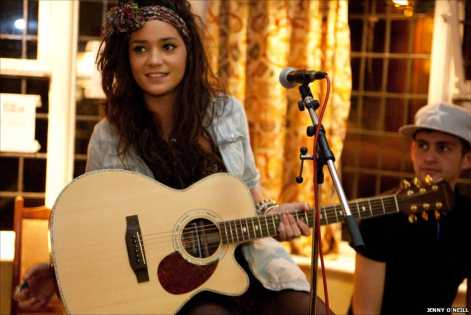 The Sundown Festival, set to take place at the Norfolk Showground on Saturday 1 and Sunday 2 September, has announced that the region’s latest hot talent will take to the Main Stage on the Saturday

With over 10 million views and 35k subscribers, Ria Ritchie is nothing short of a Youtube phenomenon. Through uploading videos of herself performing covers in her bedroom in Lowestoft, she managed to create an online buzz most signed acts would kill for. It also put her in front of some very influential people in the music industry, which would take her on a fairy-tale journey of epic proportions

Plan B was the first to spot her talents and, after seeing one of her covers on Youtube, he immediately brought her to London for a writing and studio session which produced five tracks. Since then it has been a roller coaster ride for young Ria. With the Plan B songs in her back pocket and other songs written with the likes of Craze & Hoax (Emeli Sande, Dot Rotten), Futurecut (Lily Allen, Rizzle Kicks, Olly Murs) and Ben Mark (Take That), she was eventually signed to EMI Publishing

2011 was the year that Ria flourished through a process of incessant gigging, including supporting Tinchy Stryder, Example and Wretch32, and intense song writing, the product of which can be seen in the video for her debut single, Only One (www.youtube.com/riaritchie). With online Twitter and Facebook support from Dappy, Plan B, Tinchy et al, and radio support from BBC Radio Norfolk and Suffolk (Suffolk playlisted the track three months before release), Only One is getting love and attention in all the right places. In 2011 the fuse was lit for Ria Ritchie, 2012 looks like it'll be the year she explodes onto the scene

Also recently announced to perform at the East of England’s most progressive music event are rising stars Josh Osho, Parade and Intensi-T, along with Live & Unsigned winners CoCo and the Butterfields, Hatty Keane and Molly Smitten-Downes

In addition, one of the biggest model agencies in the world, NEXT Models – who represent supermodels Arizona Muse and Karlie Kloss, as well as talent including Professor Green - is set to deploy an army of talent scouts to the event later this summer to look for new faces

‘Weekenders’ (Campers) will also be able to enjoy a pre-event party, on Friday 31 August, with an exclusive, intimate set by renowned DJ, Jaguar Skills, late that night in the Warehouse, as well as being treated to further exclusive after-show parties in the Warehouse, performed by B Traits and Breakage on the Saturday night, and RATPACK on the Sunday night

Sundown Festival spokesman, Dion Clements comments: “Ria is an amazing up-and-coming talent and we’d have been pleased to welcome her to the main stage for this reason alone, but the fact that she originally comes from the area is even better. For anyone who hasn’t yet heard of Ria, she’s tipped for the top by so many influential people in the industry”