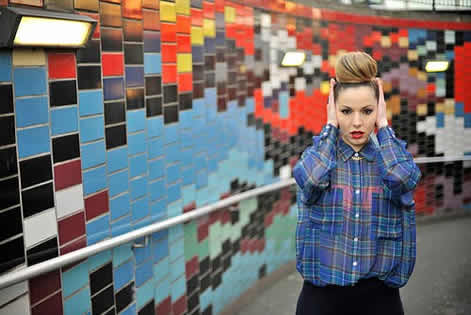 Ayah Marar's new single 'Follow U' is out on Ministry of Sound in September and she will be playing V Festival and That Mixmag Thing + a string of shows this summer.

Introducing ‘Follow U’, Ministry of Sound’s latest dancefloor killer and the coming together of Yogi - one of the most exciting young producers in the UK - and Ayah Marar –the hottest new talent to emerge from dance music. The single has already received several Radio 1 plays from Annie Mac, Mistajam and Fabio & Grooverider.
Born in Jordan and with little exposure to underground dance music, Ayah Marar moved to the UK when she was 17 and proceeded to immerse herself in the drum ‘n’ bass scene: starting her own label, putting on clubnights including a residency at Herbal and touring as an MC. Alongside adding guest vocals to tracks on Hospital Records and the Metalheadz label, after meeting Calvin Harris in a record shop, she collaborated with him on his early singles and then joined Paul Epworth in the studio whilst adding vocals to Jack Penate’s second album. ‘Follow U’ will be followed by Ayah Marar’s debut album out in 2012.
Layering heavy dubstep beats, atmospheric trance-inspired synths with lingering piano keys and Ayah Marar’s powerful echoing vocals, ‘Follow U’ is set for release on September 11th through Ministry of Sound. It will be backed by a slew of remixes including EPIC, Youth Kills, Trolley Snatcha, Xilent, Star One, Artificial Intelligence, Submerse and Michael Delinquent.

Published on 02 August 2011 by Wayne Feltham