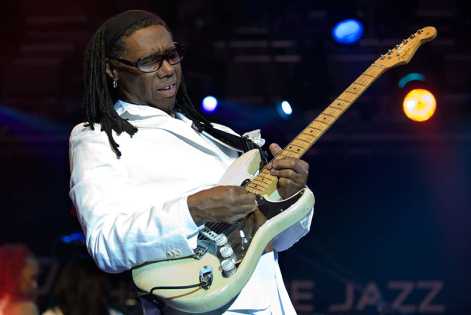 Chic featuring Nile Rodgers are arguably disco’s greatest band. Le Freak, Good Times and Everybody Dance are some of the finest dance singles of all time. They of course helped inspire modern day dance and even hip-hop after the post disco era

The Magic Loungeabout returns for its third year with an inspiring programme of music and arts. A family-friendly festival for the more discerning out there, it offers the perfect mix of avante pop, fringe cabaret, inspiring speakers, thought provoking cinema and fine food, all set in the spectacular grounds of Broughton Hall. The Magic Loungeabout is one of the most imaginative festivals in the north and the ultimate escape to the country for those in the know. The festival’s ethos offers everyone the chance to see arena filling-acts in an intimate setting.
Simon Adamson, the festival’s founder, says, “We’re incredibly proud to announce out first wave of acts, our brilliant new website and also be able to offer Loungers the chance to spread out their ticket payments. There is still lots more to come from us, but for the time being I feel this summer is already going to be so special for everyone at Broughton Hall, now we have announced one of our headliners. We also have got some great new talent from around the world too, as a big part of what we aim to do is introduce the next wave of stars, building upon having Ed Sheeran performing here last year.”
Chic featuring Nile Rodgers are arguably disco’s greatest band. Le Freak, Good Times and Everybody Dance are some of the finest dance singles of all time. They of course helped inspire modern day dance and even hip-hop after the post disco era. It’s not surprising, then, that Nile Rodgers became one of the most successful producers in the 80’s working with the likes of Madonna, David Bowie and Duran Duran. We’re incredibly proud that they will be headlining Friday for what promises to be the best start to our biggest party yet.

We brought some of the UK’s best new talent to Yorkshire in 2011, including the Brits award star Ed Sheeran. This summer we are introducing more future stars. First up is Benjamin Francis Leftwich, who’s debut Top 40 album Last Smoke Before The Snowstorm was cited as Album of the Week on Radio 1 and XFM as well as Album of the Day on BBC 6 Music. His debut single Box Of Stones was also awarded the coveted Zane Lowe’s Hottest Record In The World. Lucy Rose, whose beatific vocals have already seen her as a guest vocalist with Bombay Bicycle Club; she is a bold new talent whose poignant vocals have already won her plaudits and lots of fans. Cashier No 9 further illustrates The Magic Loungeabout’s ethos of supporting new talent; with their rich vocal harmonies, bold guitar textures and supremely catchy melodies, Cashier No 9 have created a vibrant new sound. Their eclectic, layered, guitar-jangling country-laced pop has been produced by David Holmes, further enhancing the burgeoning reputation. Superlative Spanish talent and Radio 2 Record of the Week Juan Zelada joins the infectious NYC songstress Jenny O, adding a truly global flavour to the first round of names at The Magic Loungeabout. There are over 50 more acts to be announced over the coming weeks.

At the festival, Loungeabouters can indulge in everything from VIP waiter service and morning papers and breakfast delivered to tents, to a wide range of boutique accommodation and massages, spa treatment and succulent home-cooked food. This is a glorious weekend of intimate escapism for those seeking a very refined unwind this summer.