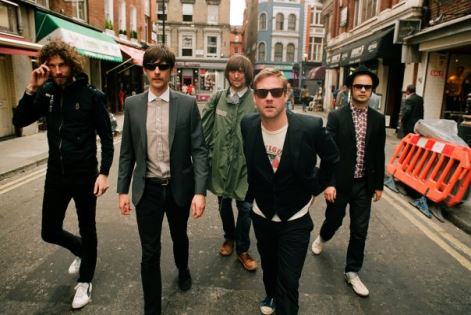 Kaiser Chiefs have been announced to headline the Saturday night of this year’s Belladrum Tartan Heart Festival (6th – 8th August 2015; Beauly, Inverness-shire) in a Scottish festival exclusive and their first ever appearance at any Highland festival

The band’s only gigs in the Highlands were in 2004 when they supported the Ordinary Boys at The Raigmore and during a mini-tour in 2008 when they sold out two nights in Strathpeffer Pavilion in ten minutes. Songs such as ‘Ruby.’ ‘I Predict A Riot,’ and ‘Never Miss A Beat’ have brought the band fame worldwide. The Proclaimers have already been announced as the headliner of the festival’s new third day main stage evening programme on the Thursday.

Also announced to headline the Black Isle Brewery Grassroots Stage on the festival’s Friday night is the celebrated Glasgow singer Eddi Reader MBE who has had a highly successful solo career after fronting up the band Fairground Attraction.

“The Kaisers 2008 gig at Strathpeffer has gone down in Highland lore as one of those epic ‘I was there’ moments. Much to my disappointment, I wasn’t, so I’m really delighted to be able to bring the band back to the Highlands for their first ever festival here,” said Belladrum promoter Joe Gibbs.

Belladrum has also announced that its fancy dress theme this year will be ‘Superheroes.’ A Friday headliner will be publicised in due course, together with around 100 more acts.

The festival takes place on 6th- 8th August August 2015. A new optional premium three day ticket to an additional headliner performance on the main stage on the Thursday opening night has been added to the event. The Proclaimers have been announced to headline the Thursday night. Weekend, child (12 & under), campervan/caravan and electrical hook-up e-tickets can be purchased by going to the ticket link on the festival’s web site www.tartanheartfestival.co.uk or direct to www.skiddle.com Bella sold out in record time in 2014, and has sold out each of the last six years, often months before the event so fans are urged to buy early to avoid disappointment. E-tickets are more customer-friendly and less easy to scam, but printed tickets are also be on sale via the usual retail outlets.

Belladrum 2015 takes place in the beautiful Highland surroundings of Belladrum Estate, near Beauly in Inverness-shire. The independent festival has built a reputation for its eclectic line-ups, its offbeat non-musical entertainments and its all-ages approach. The festival won a VisitScotland Thistle Award in 2009 and is a past winner of the Grassroots Festival Award at the UK Festival Awards, the festival industry’s ‘Oscars’.