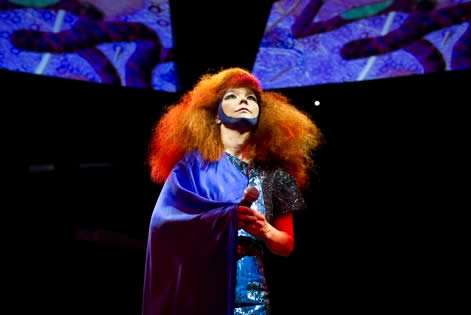 Björk will be playing her only outdoor festival show in the world this year as Bestival 2011s Sunday night headliner, joining the previously announced bill toppers The Cure and Pendulum.

Rob da Bank says: ‘I honestly can’t believe Björk is coming to Bestival. Without a doubt one of the most iconic musicians of the last century, Björk is always one step ahead of the pack with her music and innovations and the new Biophilia show is jam-packed full of technology, great interpretations of her amazing catalogue of songs and some brand new corkers. The grand finale to Bestival 2011 just got better!’
Björk’s unique vocal flare and experimental spark has made her one of the world’s greatest artistes and her spellbinding live shows have become the stuff of legend, so it’s a complete honour that she’s coming to our Isle of Wight shindig. In a worldwide outdoor festival exclusive, Björk will be playing a host of classic tracks, bringing things right up to date with her current hugely anticipated and inspirational musical project and album, ‘Biophilia’, which continues to push the boundaries of entertainment, combining music, apps, internet installations and live shows. Making it a sure fire guarantee that Bestivalites are in for a proper treat when it comes to this year’s closing set on the main stage.