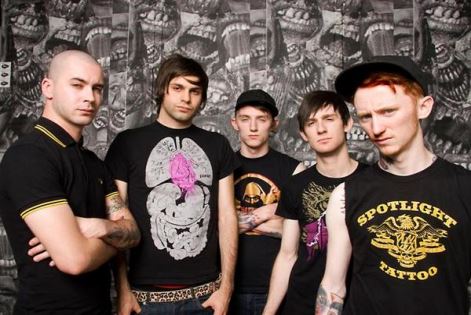 Ultra heavy metal masters from Arizona Soulfly will be headlining The Big Cheese Rock Cave on Saturday 19th July.  Formed in 1997 by ex-Sepultura founding frontman Max Cavalera, Soulfly are a true force to be reckoned within the realms of metal.  Responsible for releasing nine studio albums, one tour EP, 18 singles, and one DVD video, Soulfly incorporate many styles of metal with Brazilian tribal and world music. All of their first six studio albums debuted on the United States Billboard 200, with their debut album, Soulfly, being certified gold by the Recording Industry Association of America. Their ninth album, Savages, was released to critical acclaim on September 30, 2013. Organisers are delighted to have an act with such a huge and devoted following to headline Rock Cave this year.

Hardcore punks Gallows are confirmed to headline The Big Cheese Rock Cave at GuilFest on Sunday 20th July.  A band that have always thrived on controversy, Gallows have been described by pundits as both 'The best British punk band since The Clash' and 'The British music industry's biggest mistake’! The Hertfordshire hardcore crew first emerged from the fertile UK underground punk scene in 2005 and in 2007 Gallows won the Kerrang! Award for Best British Newcomer.  Since then they have gone through various lineup changes and have toured the world, playing support slots for huge acts such as Rage Against The Machine, AFI and Gogol Bordello, as well as achieving UK chart success with their critically acclaimed album “Grey Britain”.  Gallows have become known for their full on live performances and organisers are expecting them to blow the roof off The Rock Cave at GuilFest this summer!

1970’s Punk rockers Chelsea are confirmed to support Sham 69 (Original Line Up featuring Jimmy Pursey) on The Vive Le Rock Stage on Friday 18th July.  Chelsea was one of the original punk bands to form out of the mid-70s punk frenzy that marked a generation. Fronted by Gene October, Chelsea has gone through almost as many personnel changes as Art-Punk outfit The Fall! The subject matter most often sung about was the plight of the working class and youth gone wild and the original line-up consisted of October on vocals as well as guitarist William Broad who would be later better known later as Billy Idol!

Public Service Broadcasting are confirmed to headline The Good Time Guide Stage on Friday 18th July.  The corduroy-clad brainchild of London-based J. Willgoose, Esq along with his drumming companion, Wrigglesworth, PSB's uniquely spell-binding live AV Transmissions see them weave samples from old public information films, archive footage and propaganda material around live drums, guitar, banjo and electronics as they teach the lessons of the past through the music of the future - beaming our past back at us through vintage TV sets and state of the art modern video projection devices.  Prepare to be amazed!

Disco group Boney M. will be headlining The Good Time Guide Stage on Sunday 20th July.  They were a European phenomenon during the '70s and famous for huge tracks such as "Daddy Cool", which reached the U.K. Top Ten in February 1977, as well as "Ma Baker", which just missed the U.K. number one spot, and "Belfast" which also hit the Top Ten in 1977. 1978’s "Rivers of Babylon"/"Brown Girl in the Ring became the second-biggest selling single in U.K. chart history and Boney M's album, Nightflight to Venus, also topped the U.K. charts. "Rasputin" became another U.K. Top Ten hit, followed by the seasonal chart-topper "Mary's Boy Child"/"Oh My Lord," which became the fifth-biggest selling single in U.K. history. In March 1979, "Painter Man" hit the U.K. Top Ten, followed in May by "Hooray! Hooray! It's a Holi-Holiday." In September, the album Oceans of Fantasy hit number one.

Drum and bass heavyweight Friction returns to GuilFest on Saturday 19th July, headlining the Kane FM presents Funky End Dance Tent.  The Brighton raised, multi-award winning DJ is one of the most revered and recognised names in bass music today. Having risen steadily through the ranks since the early 00's as arguably the most adept and most ferocious DJ/producer in the scene, Friction now holds court in the D&B Hall Of Fame thanks to his inauguration at the 2011 Drum & Bass Arena Awards.  Whilst DJ'ing across the world every weekend and heading up the juggernaut record label Shogun Audio, Friction has achieved much commercial success and was announced at the start of 2012 as the new face of Radio 1's flagship drum & bass show – an honour every self respecting UK drum n bass artist aspires to.  For this special GuilFest performance, Friction is joined by none other than MC’s P Money and Linguistics, two of the best lyricists the UK has to offer today.

House aficionado Kidnap Kid will be performing his particular brand of dance music to crowds in The Kane FM Presents Funky End Dance Tent on Sunday 20th July, supporting Fred V and Grafix and Sigma.  An award winning producer in his own right, Kidnap Kid aka Matt Relton extends his talents to remix and production duties, smashing official remixes for Emeli Sande and Disclosure, and recently co-producing tracks for Lulu James. Out of the studio, he kicked off last year with a 16 date US Tour, supporting none other than Rudimental, TEED, & Disclosure.

Soul/Jazz outfit Stone Foundation are confirmed to perform on the Vive Le Rock Stage on Friday 18th July.  A group of seven like minded individuals that team together to make a sensational and dynamic soulful sound that is capturing the hearts and minds of live audiences and influential movers and shakers alike.  Based in the unlikely setting of rural Warwickshire, the band have played and released music with northern soul legend Nolan Porter, Detroit soul singer Steve Calloway and Motown legend and Undisputed Truth front man Joe “Pep” Harris. Stone Foundation also released a film in 2013 “Keep On Keepin’ On” documenting their time recording and touring with Nolan Porter in the UK.

DON’T FORGET! You still have a few days to get yourself a great deal and take advantage of the special Spring Saver Offer – only available until 6pm on May 6th! See the website for full details! Also don’t forget that visitors who want to experience GuilFest in style, for the first time ever in the festival’s history a very limited number of VIP tickets are available to the public – These will allow access to a backstage area with posh loos, and a special bar for exclusive aftershow parties! You never know who you might see around there!

GuilFest has been consistently voted as one of the UK's best family festivals over the past 7 years, winning the prestigious award in 2006.  Held in the idyllic location of Stoke Park, Guildford, visitors can expect a great weekend featuring 7 stages of live music, the Comedy Zone, Theatre Tent, amazing Kidzone, as well as brilliantly unique attractions such as Farmer Giles Barndance, La Discotheque, massive late licensed bar with GuilFest’s very own ale, Calypso Cocktail bar, great food and drink from around the world, and much more besides!