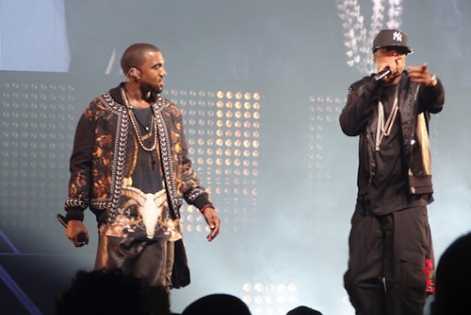 Due to phenomenal public demand, Superstars Kanye West and Jay Z have added a further 4 UK shows to their previously announced ‘WATCH THE THRONE’ European tour. They will be performing an additional 3 shows at London’s O2 and Manchester.

After the phenomenal success of their chart topping album WATCH THE THRONE, a 35 date sold out, critically acclaimed US tour and hot on the heels of their huge success at the 2012 Grammy Awards, winning the award for ‘Best Rap Performance’ (for their track ‘Otis’), the duo’s collaboration ‘The Throne’ will embark upon a European tour that will visit arenas in the UK, Switzerland, Denmark, Norway, Sweden, France, Belgium, Germany and Ireland.
For this project, music icons and pop culture visionaries JAY Z and Kanye West joined their extraordinary talents to form the group ‘THE THRONE’ and released the most anticipated album event of 2011, WATCH THE THRONE.   On Monday, August 8th last year, THE THRONE’S extraordinary once-in-a-lifetime, Platinum selling Roc-A-Fella / Def Jam Recordings / Roc Nation album collaboration, WATCH THE THRONE, debuted at number 1 and has garnered several Grammy nominations.
The longtime friends and music innovators inspired each other to new heights with their collaboration on WATCH THE THRONE recorded in person at various locations around the world. Over a year in the making and a truly global affair, the duo recorded in London and Bath in the UK, Abu Dhabi, Sydney, Paris, and New York City.  The album features production from The RZA, The Neptunes and Kanye’s longtime collaborator Mike Dean. The short list of featured vocals includes Frank Ocean, Beyoncé, Curtis Mayfield and Mr. Hudson.  The lead track, “OTIS,” brilliantly weaves Otis Redding’s “Try A Little Tenderness.”
The production is classic Kanye West soul, with the two MCs trading couplets over a sample manipulated the way only West can. “Sounds so soulful, don’t you agree?” intones JAY Z, and the two launch into a treatise on swagger, claiming their rightful place at the top. Since the track’s release, the flood of praise for the track has been nothing short of deafening. Entertainment Weekly declares the track “the most well-executed rap song of the year.” “Otis” can be streamed at watchthethrone.com/otis.
Both JAY Z and Kanye West have each appeared as guests on the other's stage, and now they come together for never-before-seen performances not only from their collaboration, WATCH THE THRONE but also songs from their classic catalogue.