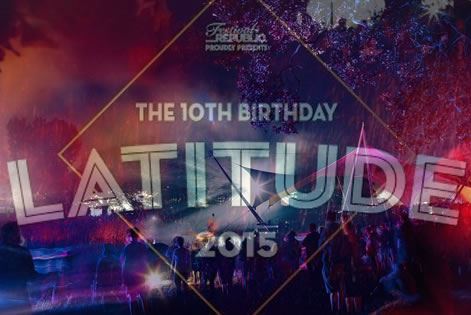 2015 will be the tenth successive year of Latitude festival, the UK’s favourite multi-arts festival which takes place at Henham Park in Suffolk from 16th -19th July.

Staged across the lush green acres of Henham Park in Suffolk and only a few miles from Suffolk’s stunning coast line, Latitude has one of the most beautiful settings of any festival in the UK, with green credentials to boot, and a perfect weekend getaway for anyone wanting to chill out while listening to music.

Latitude is surrounded by woodland and there are two wooded areas for festival goers to loose themselves in, The Faraway Forest and In the Woods. The i Arena is at the heart of the woods, a stunning music stage where you can sit out under the tree canopy and lose yourself and beautiful chilled out music.

At the center of the festival is a pretty lake with two bridges. On one side of the lake be transported to Italy, as Venetian boatmen offer free Gondola rides alongside Latitude’s Waterfront Stage which floats on top of the lake. The festival’s hand crafted gondolas are completed with Gondoliers in striped super tight T-Shirts and berets. The ultimate adventure for a festival romance.

On the other side the lake is going to be open for wild swimming for the first time to mark Latitude’s 10th Birthday in 2015. Adventurous festival goers can take part in a guided swim that will take them into the heart of Henham Park, while those who want to kick back and relax head to Solas, Latitude’s brand new chill out area.

For a full list of artists appearing and the full list of national and regional ticketing outlets please visit www.latitudefestival.co.uk

There are 2 ways to win this fantastic prize - Either first register and click ENTER COMPETITION below or RETWEET the competition link on twitter @UKFG with #LATITUDE2015, it couldn't be easier.

The winner will be selected at random and contacted after the competition closes on July the 1st.