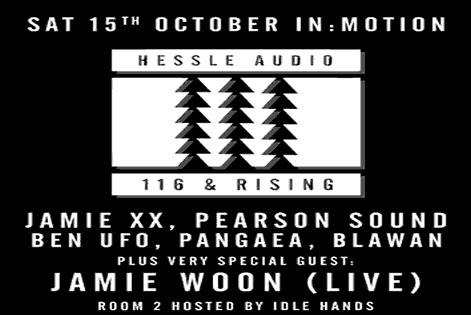 The start of the UK party season this year is led by Bristol’s pioneering party starters In:Motion. A series of incredible events striking hot on the heels of last year’s triumphant first season, which tore a hole in the skate park come club Motion, spread across five rooms indoors and out.

The peerless Hessle Audio make their Bristol debut for the In:Motion series on Saturday 15th October and intend to make themselves standout by offering a monumental line-up in the form of Jamie XX and Jamie Woon. Jamie XX’s movements out of his band to DJ and remix artist have been well received with heavy weights such as Radiohead’s Thom Yorke, Florence and The Machine, and Canadian rap giant Drake.  Since Jamie Woon came onto the scene everyone has been scrambling for the opportunity to see him live. His album debut Mirror Writing saw him strike a terrific balance between convention and subversion producing dubstep infused commercial tracks, which everyone likes.

UK Festival Guides are giving a lucky winner the chance to win a pair of tickets to this great day of dance euphoria.  Not only will you receive 2 tickets plus queue jump but also a few free drinks to start the night off!
All you have to do to enter is simply make sure you are Registered with UK festival guides (for registration see top of page). If you are registered you will see an ENTER COMPETITION box below, click it and you’re in with a chance of winning this great prize.
Don’t miss out! Good Luck!
The winner will be picked at random and contacted after the closing date of 10th October.