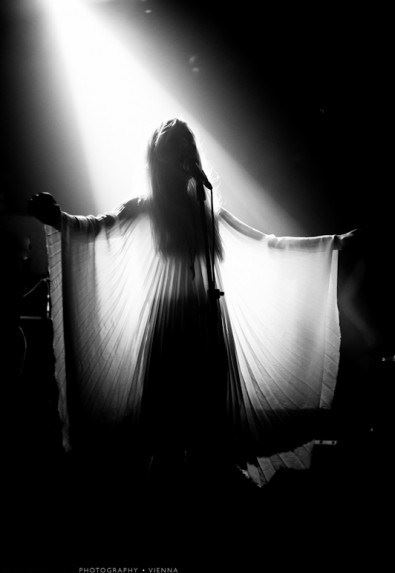 Zola Jesus is the stage name of Russian-American singer-songwriter Nika Roza Danilova (born 11 April 1989 in Phoenix, Arizona and raised in Merrill, Wisconsin, USA). Her music style combines electronic, industrial, classical, goth, and experimental rock influences.
Nika Roza Danilova was raised in Merrill, Wisconsin, on over 100 acres of forest. Danilova started singing early on, buying voice lesson tapes and opera sheet music at the age of 7; soon she began working with a vocal coach. It was not her parents' idea: "I begged them to do it. For some reason, I really wanted to sing opera even though I wasn't really exposed to it as a kid. I think my little baby toddler mind heard some opera song and then became fixated on how powerful it sounded," she later remembered. Danilova started performing opera when she was 10 years old, but experienced serious psychological difficulties. "I would too often lose my voice before performances due to anxiety, and was so hard on myself. I would beat myself up about any imperfections or flaws in my voice. I was such a perfectionist, and my voice was still so young so it couldn't do everything I wanted it to, and I resented myself for that. But since performing as Zola Jesus it's been getting easier," she later recalled.
In her teens, Danilova started to experiment in a more rock-orientated format. By naming her alter ego after Jesus Christ and the French writer Émile Zola she said she consciously wanted to alienate peers. "It worked perfectly – a lot of people wouldn't even say Zola Jesus because they thought it was sacrilegious", she said in an interview. "Using Jesus in my name isn't necessarily supposed to be a strong statement. I respect religion and I know people do need it, but it's a weird phenomenon in our world. It's so weird," she later commented. Inspired by favorites like Ian Curtis, Lydia Lunch, Diamanda Galás, Throbbing Gristle and Swans (but also bubblegum pop and classical aria), she started to record at home, using keyboards, drum machines and "anything else she had on hand". In 2008 she debuted with singles "Poor Sons" on Die Stasi and "Soeur Sewer" on Sacred Bones Records.
In 2009, while still studying at the University of Wisconsin-Madison, Zola Jesus recorded (in her apartment) and released her debut full-length album The Spoils. The sound was in a certain way dependent on her surroundings. "I usually record in the winter because I am holed up. It's cold outside but warm inside with the heater and blankets. A lot of the songs are cold but in the coldness you find warmth. Winter has a lot to do with it.
Zola Jesus released an EP titled Stridulum in 2010, described as her most melodic work to date. Inspired by the Giulio Paradisi 1979 film of the same name, it marked "a huge leap forward in terms of fidelity and accessibility." After the release Zola Jesus performed at the SXSW festival, for her second time. Her second full-length album Stridulum II, which was an extension of the EP regarded as a debut in the UK, received 8/10 from NME which praised Danilova's classically trained voice as "the deadliest weapon in her arsenal" and called the album a "dark masterpiece."
Zola Jesus' third full-length Conatus was released in late September 2011 via Sacred Bones. The album's 11 tracks were produced by Brian Foote (aka Nudge; Jackie-O Motherfucker, Cloudland Canyon) and Danilova herself, including elements of cello, double bass, violin, and viola.
Zola Jesus has played with Former Ghosts and toured in support of Fever Ray and The xx. She also provides guest vocals on "New France" from their 2012 album Wonky.