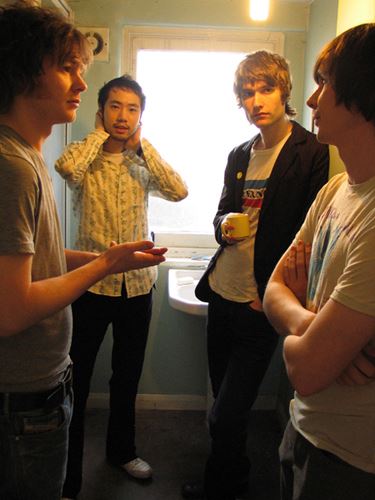 There are at least 9 artists with this name
1. A rock band from the United Kingdom
2. An ambient musicin
3. A jazz rock band
4. A death/black metal band from Florida, United States
5. A metal band
6. A rock band from Massachusetts, United States
7. A rock band from France
8.A rock band from New York, United States
9.A Japanese rock band formed in 2013
(1) Yeti is a British rock band fronted by bass player John Hassall, formerly of The Libertines. The group's highest accomplishments include opening for Oasis.
Hassall met bassist Brendan Kersey, lead guitarist Andy Deian Jung, and guitarist Harmony Williams through mutual friends. The line-up was completed after drummer Graham Blacow joined. Hassall writes most of Yeti's songs, but Williams has also penned several, and sings lead on his own songs. The band plays acoustic rock with a bluesy undertone and strong harmonies. Influences include The La's, Bob Dylan and The Beatles. Their debut single "Never Lose Your Sense of Wonder" was released in March 2005 and reached number 36 in the British charts. (wikipedia.org)
(2) Yeti is also the name of an ambient project by Krister Linder.
One full length album, called 'Holtkötter', 1 EP and 3 singles have been released by Krister under the name Yeti.
(3)YETI formed in August of '98 as a merger of two bands. The first group, already named Yeti, consisted of Tommy Atkins on bass, Jon Teague on drums, Eric Harris on guitar, as well as another guitarist. The second, Est Mort, was a loosly organized group occasionally getting together on weekends with Atkins, Teague, and Doug Ferguson on keyboards. When the original Yeti lost it's lead guitarist, Ferguson was asked to come in for trial practice.
After countless live shows, the studio LP "Things to Come" and several live Cds, Ferguson left this earth on February, 23, 2002. Faced with a serious creative and moral dilemma Atkins, Harris, and Teague opted to continue as a trio, with Atkins and Teague taking over keyboard responsibilities. YETI continues to offer a heavier music combining the darker elements of jazz and rock forms
(4) Yeti is also an American black/death/doom metal band based out of Florida consisting of Al Nunn on guitar, Mike Curry on guitar, Eric Avant on keys and vocals, Jonathon Montgomery on bass, and Scott Nunn on the drums. They have released one full-length (Niflheim), an EP (Yeti) and a live DVD. They have changed their name to Among the Dead
http://www.myspace.com/theyeti
(5) Yeti, metal, Album: Trees on Fire With Songs of Blood, 2010
(6) Yeti consists of Omar Khouri, Russell Lichter and Rob LaMorgese. Rob and Russ met at college in Boston in the late nineties. Rob and Russ met Omar in Los Angeles after the turn of the century.
The three hit it off nicely and decided to try jamming together. While their styles were a bit different, they seemed to mesh well. Most of the music was recorded at Omar's apartment in summer. It was during the recording sessions that their mutual love of verses was discovered. Screw choruses. They're cheap and tawdry.
Omar and Russ wrote the majority of the music, but Rob kicked in a bit here or there. I think there was even a whole bass line he wrote. It was so good, he couldn't play it. Omar did. Or Russ. He can't remember.
Omar and Rob did the singing. They usually wrote the lyrics they sang, but occasionally backed the other one. This worked out well for them as they have lovely singing voices.
http://www.myspace.com/yetipage
(7) Yeti is a French band led by Holland-born Jetty Swart, who plays accordion and sings (and sometimes performs solo under the name Yeti); other band members are Francois Fava (saxophone & flute), Alain Dumont (bass) and Luc Pallier (drums).
http://www.myspace.com/yetila
http://lecrideyeti.free.fr/
(8)Yeti is female-fronted bass-driven philosophical dream-punk with cute killer harmonies. This New York-based trio reeks of feral femininity, fermenting in the forgotten woods of Staten Island. Their music fuses Sleater-Kinney sensibilities with The Cranberries’ emotional power. Yeti can be found playing at various venues throughout the New York City area, or in very cold, dark, remote caverns from which few have ever returned. Currently, they have two full-length albums White Devil (2013) and Shadowhead (2014); as well as their acoustic EP Fur You (2014).
Members: Julia Simoniello (lead vocals and guitar), Jenna Snyder (bass), Tom Bones (drums)
http://yetimusic.co
http://soundcloud.com/yetisetgo
http://www.facebook.com/yetisetgo
(9)Yeti is a japanese rock band that started its activities on 2013/03/16. Alternate tag: Ｙｅｔｉ
Vo.&Gt.涼木聡 (Suzuki Satoshi) (ex-モノもの → 愛狂います。)
Gt.荒牧幸久(Aramaki Yukihisa) (ex-WeiβNoir. →Ｕｍｂｒｅｌｌａ → .ＥＸＥ → Ｃｈｅｒｒｙ(support))
Ba.Bikkey (ex-Ｒｅｔｉｎａ → シリアル⇔NUMBER)
Dr.多村直紀(Tamura Naoki) (ex-CalorZe → ジーク → イロクイ。 → 愛狂います。 (support) → Ｌｉｐｓ)
http://yeti-web.jp/index.html