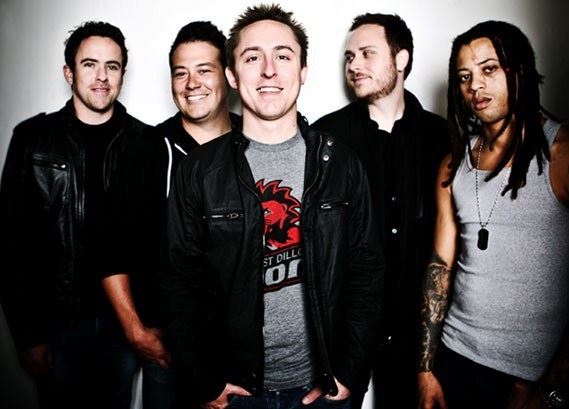 Yellowcard is a multi-platinum selling pop punk band from Jacksonville, Florida, USA. Their latest work Lift A Sail was released via Razor & Tie on October 7th, 2014.
Their music features a rare contribution to the genre, incorporating the use of a violin. Formed in 1997, the current line up consists of Ryan Key (vocals, rhythm guitar), Ryan Mendez (lead guitar, vocals), Sean Mackin (violin, vocals), Nathan Young on drums, and Josh Portman on bass.

Yellowcard was formed in 1997 in Jacksonville, Florida, USA after meeting at Douglas Anderson School of the Arts. The band was made up of six members back then:
Ben Dobson (1997 - 2000) : vocals, Todd Clarry (1997 - 2001) : guitar, vocals, Sean Mackin (1997 - present) : violin, vocals, Warren Cooke (1997 - 2002) : bass, Ben Harper (not the same as Ben Harper) (1997 - 2005) : guitar, Longineu W. Parsons III (1997 - present) : drums.
Former members: Ben Dobson (1997 - 2000) : vocals, Todd Clarry (1997 - 2001) : guitar, vocals, Warren Cooke (1997 - 2002) : bass, Alex Lewis (2003 - 2004) : bass, backing vocals, Ben Harper (1997 - 2005) : lead guitar, Peter Mosely (2002 - 2003, 2004 - 2007) : bass, vocals, Sean O'Donnell of Reeve Oliver(2010–2012) : bass guitar, backing vocals
The band released their first album, Midget Tossing, in 1997 but with not much success.
Around that time their lead singer was replaced by Ryan Key who convinced the band that they couldn't be successful in Florida, so they decided to move to Southern California.
The new group released their debut album, One for the Kids (Lobster Records), in 2001, and followed up with The Underdog EP (Fueled by Ramen Records) in 2002.
Yellowcard signed with Capitol Records in 2003 and released Ocean Avenue, which is their most successful album to date.
Soon after, bassist Alex Lewis was let go by the band. Pete Mosely who had produced and played bass on most of the songs on Ocean Avenue took over on bass.
The Yellowcard popularity "skyrocketed" after this period, with a song from their Ocean Avenue Album, "Breathing" appearing on EA Games' famed title, Burnout 3: Takedown in the winter of 2004. The song was very popular among users of the game, which had previously been owned by the British company Criterion, but had been acquired by EA. People from across the world began to sample the Yellowcard fanaticism that people had over the times previous.
The album Lights and Sounds was released in January 2006. The title track, Lights and Sounds, was the first single released off the album. It is also featured on the game Burnout Revenge. The whole album is based on a concept theme with many songs expressing their dislike for Los Angeles. Lights and Sounds also features a special guest appearance of Dixie Chick Natalie Maines on How I Go.
In 2005 the guitarist Ben Harper left the band due to disputes.He chose to work with his record label TAKEOVER RECORDS and has signed bands since his departure. He did do some guitar work for Lights and Sounds which is still in the songs on the album. He was replaced by Ryan Mendez (formerly of Staring Back) shortly before the Lights & Sounds tour began.
Paper Walls is their latest album released July 17th, 2007. Light Up the Sky is the first track released off this album. The title track from this album sees Yellowcard reach new levels and shows the depth they have grown to. After their tour for Paper Walls in 2008, they went on an indefinite hiatus for almost 2 years. They have since come back from their indefinite hiatus and recorded the new album, When You're Through Thinking, Say Yes.
On August 1, 2010, it was confirmed that Yellowcard is back, working on a new record. When You're Through Thinking, Say Yes, was released on March 22nd, 2011 via Hopeless Records.
Later they then came back and released Southern Air in 2012.