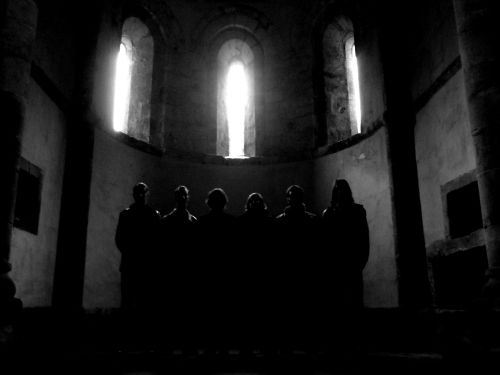 Year of No Light (often abbreviated as YONL) is a French post-metal band from Bordeaux formed in 2001 by Johan Sébenne, Bertrand Sébenne, Jérôme Alban and Christophe Mora. Since it's conception, YONL was never a "top priority" band but rather an instrumental side project. After one year of rehearsal, Christophe Mora left the band. Pierre Anouilh succeeded him. One month later, the band played live for the first time. From 2002 to 2003, they played local shows in Bordeaux. In September 2003, Julien Perez joined the band as a singer. One month later, the new line up played its first show. But YONL still remains an "active" side project, due to all the others musical activities of the vast majority of its members.
The band finally recorded a Demo in June 2004. After its release, the group toured Spain and Basque Country. Following the good feedbacks surrounding the Demo (one review describing YONL as "The Cure playing sludge"), the band worked on its first album during the summer 2005. In September 2005, they recorded Nord with Serge Morattel at Geneva, Switzerland. The following year, Nord was released and got good reviews. For their debut album YONL drew influence from several genres, including post-rock, sludge, somber psychedelics and depressive atmospheric shoegaze. Year of No Light began to tour more often in 2006 and played at the famous Dour Festival in 2007. The same year, Nord was reissued on Crucial Blast, for the CD version, and Cavity Records for the LP.
In 2008, Year of No Light toured Europe and played at the prestigious Roadburn and Hellfest festivals. After several collaborations with acts like Nadja and Fear Falls Burning and some splits recordings, they discarded their singer. At the end of the summer, YONL becomes a six piece entity with two drums and three guitars backed by some vintage synths. Shiran Kaïdine, from Monarch, and Mathieu Mégemont, from Aérôflôt, have joined the band respectively as third guitarist and second drummer.
In September 2009, the band began to record Ausserwelt in Bordeaux with Cyrille Gachet. Ausserwelt was not released until 2010 after a significant line-up change in 2008 which established the band as an instrumental sextet, including two drummers and three guitarists. Ausserwelt saw the band's sound develop in the direction of black metal and doom metal while retaining a progressive, post-rock feel. In April 2010, following the release of Ausserwelt on Conspiracy, Year of No Light toured Europe with Irish black metallers Altar of Plagues. The following month, the band worked on a soundtrack for Dreyer's Vampyr, and performed it for the first time, on May 28, 2010, at Barbey Theatre in Bordeaux. In February 2011, YONL played Vampyr in Tallinn, Estonia. The following months, after having recorded new stuff for upcoming splits, they toured Europe and played two sets at Roadburn: a classical gig (including the totality of Ausserwelt) and the Vampyr performance.
Functioning sometimes like an open collective, YONL used to punctually be part of sonic performances in collaboration with contemporary artists. Recently, the group has worked with French contemporary artist Christian Vialard for a video installation reinventing Yves Klein's Monotone Symphony. The installation can be seen during an exhibition, Le Temps de l’Ecoute, at la Villa Arson, Nice, from June 24 to October 30, 2011.
Current line-up:
Pierre Anouilh - guitar
Jérôme Alban - guitar
Shiran Kaïdine - guitar
Johan Sebenne - bass, keyboards, electronics
Bertrand Sebenne - drums, percussions, keyboards
Mathieu Mégemont - drums, keyboards, synthesizer
Former members:
Julien Perez - vocals, keyboards
Christophe Mora - guitar
Official sites:
http://yearofnolight.free.fr
http://www.facebook.com/yearofnolight
http://twitter.com/yonlofficial
http://yearofnolightofficial.tumblr.com
http://yearofnolight.bandcamp.com
http://blitzr.com/artist/year-of-no-light
http://official.fm/yearofnolight
http://www.myspace.com/yearofnolight
http://vk.com/yearofnolight