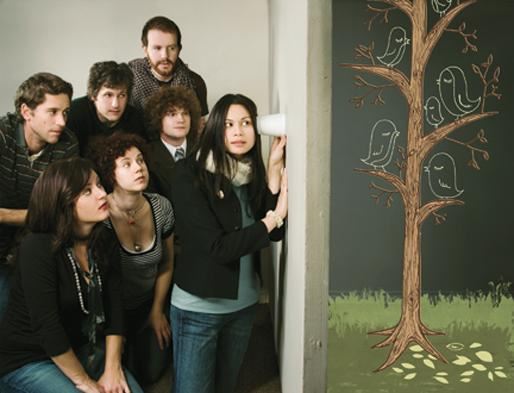 Woodpigeon are a Canadian musical collective from Calgary, Alberta. The band's sound has been compared to Sufjan Stevens, Grizzly Bear, Camera Obscura, Simon & Garfunkel, and Belle & Sebastian, amongst others. Band leader Mark Hamilton's main lyrical influence is The Kinks. When asked about the band's name, Mark Hamilton explains: "I've always been in love with the word Woodpigeon for as long as I can remember. When you write it in cursive, it looks like a rollercoaster".
Woodpigeon's origins are found with primary song-writer Mark Andrew Hamilton writing songs in Edinburgh, Scotland. At this time, the band was named "Woodpigeon Divided By Antelope Equals Squirrel", and consisted of Hamilton alongside Steve Kaye and Malcolm Benzie. Hamilton states that he "was far too scared to ever sing, so all we ever played was a couple of stupid instrumentals and our only “performance” was in the streets of Edinburgh." Eventually, Hamilton returned to Canada, and started afresh, with the shortened band name, Woodpigeon. Other band members fell in place, with Hamilton noting that: "the way it came together was simple: friends started hearing my songs and offering their services." By now Woodpigeon consists of eight core members: Mark Hamilton (vocals, guitar), Kenna Burima (piano, vocals), Michael Gratton (bass), Annalea Sordi (accordion, flute, vocals), Daren Powell (drums), Peter Moersch (electric guitar, vocals), Foon Yap (violin), AJ Benoit (vocals).
To date, the band have released two studio albums, and a number of EPs to critical acclaim. The band's first full-length album, entitled Songbook, was released in late 2006. Following its release, the band opened for Broken Social Scene, Iron and Wine, Grizzly Bear, Calexico and The Dears. With their popularity growing, Woodpigeon toured the UK, Ireland, and Germany in 2008. The band self-released an album, entitled Treasury Library Canada, in early August 2008, selling all 1000 hand-folded copies within a few months. The band also re-released their debut album Songbook in the UK on the 29 September 2008. Treasury Library Canada was officially released in February 2009. The band's third album, entitled Die Stadt Muzikanten, is expected to be released in 2009
Discography
Albums
* Songbook (2006)
* Treasury Library Canada (2008)
EPs
* Sketchbook (2005)
* Pigeonbooth: Volume the First (2005)
* Snow Shovel (2005)
* ...A Given (2006)
* Houndstooth (2007)
* Chorus of Wolves (2008)
* La Commission Scolaire (2009)
Other
* Pixie Children Crying (2008)
Singles
* "Death by a Ninja (a Love Song)" (2006)
* "That Was Good But You Can Do Better" (2008)