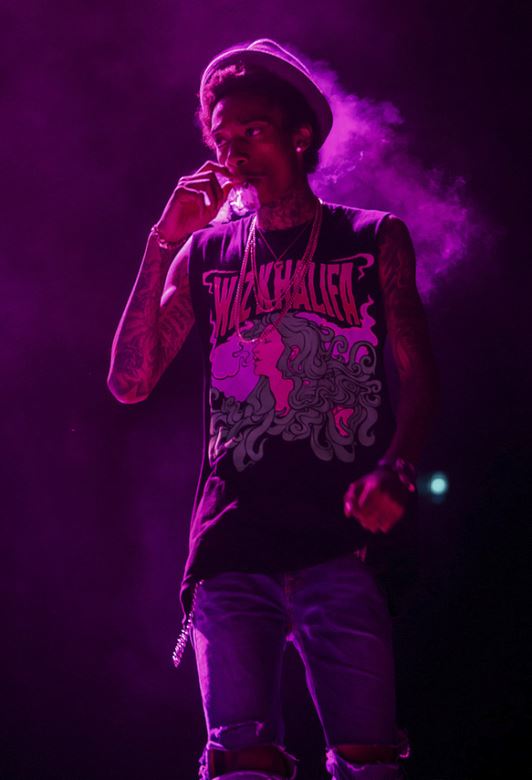 Cameron Jibril Thomaz (born September 8, 1987 in Minot, North Dakota), better known by his stage name Wiz Khalifa, is an American rapper based in Pittsburgh, Pennsylvania, signed to Rostrum Records. According to the Black and Yellow Songfacts, his stage name is derived from khalifa, an Arabic word meaning "successor", and wisdom. His nickname growing up was "Wizard" which was shortened to Wiz when Khalifa was fifteen.
In 2005 he released his first official mixtape, Prince of the City: Welcome to Pistolvania, and later in 2006 he released his first full length street album entitled Show and Prove. Since then he has released a further six mixtapes and a collaboration mixtape titled How Fly with friend Curren$y. He released his debut album, Deal or No Deal, in November of 2009, it reached #1 on the iTunes hip hop chart, and then reached the top ten on iTunes' overall album chart the week it was released. Previously signed to Warner Bros. Records, he left the label in July 2009 after numerous delays in releasing his planned debut album for the label, First Flight. Khalifa stated to the Pittsburgh Post-Gazette that, "I learned a lot during my time there and matured as an artist during the process. I'm happy to be moving on with all of my material and having the chance to be in control of my next moves".He is also the founder of the rap crew Taylor Gang, which includes friends Kev Tha Hustler, Ekko, Smallz Money and Gene Stovall. They derived the name from the fact they always used to wear Chuck Taylor shoes.
Khalifa was born on September 8, 1987 in Minot, North Dakota to a mother and a father serving in the military. The family moved to Pittsburgh when Khalifa was the age of two. His parents' military service caused the family to move on a regular basis.
Over the next thirteen years, he would move between Pittsburgh and South Carolina, Georgia, Oklahoma, Germany, Japan, and England as his parents were reassigned to different posts. In October of 1990 Wiz was separated from his mother,who left him in the hands of her sister while she served in Operation Desert Storm.
During his travels, Wiz was forced to mature quicker than his peers. He was constantly faced with new surroundings, new schools, and new sets of friends, and he found it difficult to become attached to anyone outside his family roots. This nomadic life gave Wiz an opportunity, though, to broaden his mind and offered him many experiences from which to draw inspiration. He began to perceive the world differently than most kids, and he would write his thoughts down every day.These thoughts would become the foundation for his future recordings.
By the age of 14, with a few songs under his belt, Wiz was already drawing comparisons with his commanding voice and witty wordplay. While he has been influenced by artists such as Jay-Z, Camron, and the Notorious B.I.G., Wiz was determined to create his own identity that would, one day, be loved and revered by fans.
Ready to take the next step, Wiz began his search for a recording studio to record new songs. He found one, ID LABS, where owner Eric Dan immediately recognized Wiz's talents. Along with Chad Glick of ID Management, they began to network Wiz to another Pittsburgh native, Benjy Grinberg of Rostrum Records. Benjy realized the raw talent that Wiz possessed, and immediately brought him into the Rostrum family in 2002.
Soon after, Wiz Khalifa began his ascent into the music scene in the Pittsburgh area. He has been hailed by the award winning Pittsburgh Post-Gazette pop music critic, Ed Masley, as having “the skills, the looks, the confidence, the drive, and the charisma for the job.” The New Pittsburgh Courier says, “The combination of a young, charismatic M.C. with a slew of stop-and-rewind rhymes together with a local independent label with major industry connections has set the stage for a hip-hop artist representing Pittsburgh to reach superstar status for the first time ever.
In 2010, with the success of Kush and Orange Juice still present, Wiz Khalifa signed with Atlantic Records. Wiz's style along with his production team, Johnny Juliano, Sledgren, and E. Dan make this a winning combination for success.
He is also well known for his debut single for Atlantic, "Black and Yellow", which peaked at number one on the Billboard Hot 100. His debut album for the label, Rolling Papers, was released on March 29, 2011. He followed that album with O.N.I.F.C. (abbreviated for mainstream markets from "Only Nigga In First Class") on December 4, 2012 which was backed by the singles "Work Hard, Play Hard" and "Remember You". O.N.I.F.C. debuted at number two with 131,000 in first week sales.
In April 2013, Khalifa revealed that after having his son he decided to work on a new album that he was planning to release in 2013. On April 17, 2013, Wiz Khalifa and Curren$y announced that they will drop their collaboration EP Live in Concert on April 20, 2013. The EP featured seven new songs. On June 24, 2013, he announced that his fifth studio album would be titled Blacc Hollywood and would be released in 2013. On September 3, 2013, Khalifa revealed he had recorded songs with Miley Cyrus, Adele and Juicy J for Blacc Hollywood. In October 2013, Mannie Fresh confirmed that he provided production for the album. On February 11, 2014, Khalifa released Blacc Hollywood's first single titled "We Dem Boyz". The album was then supported by the singles "KK", "You and Your Friends", "Stayin Out All Night", "Promises" and "So High".
Khalifa released an EP with TY Dolla $ign on March 31, 2015, entitled "Talk About It In the Morning". That same month, Wiz released the lead single for the film "Furious 7" called "See You Again" as a tribute to Paul Walker. The single has since gone on to global success. "See You Again" spent 12 non-consecutive weeks at number one on the Billboard Hot 100, tying for the longest-running rap number-one hit in the US.