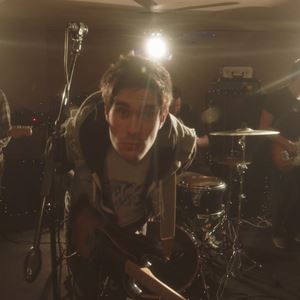 “We want something real. We want something that means something.”
Rock newcomers WITTERQUICK are establishing their new blood status following their popular self-release of ‘The Otherside’, and numerous live dates with fellow rockers Nothing But Thieves.
‘Soldiers’, the first single taken from their debut EP ‘Beneath the Spinning Lights’ (Romesh Dodangoda – Bring Me The Horizon, Twin Atlantic, Lower Than Atlantis), will be released October 30th (no label) after a supporting national tour.
WITTERQUICK began in 2014 in the back bedroom of a house in the South West of England, wanting to be the change they all desired from the music of today, “We want something real. We want something that means something.” said Will about the band’s aims, “A lot of music today is lacking that…‘thing’, that little spark, that pulls us into the music we love. We want every song we write to be our favourite song, and so far we’re nailing it.”
WITTERQUICK launched that unique blend of rock-pop into the public eye in December 2014 by releasing a music video for the dark, yet upbeat, ‘The Otherside’ to rave reviews, clocking over 10,000 views in its first month (currently over 34,000 June 2015).
“When we put out ‘The Otherside’, it was early days for us, and the first thing people see instantly labels you, but everyone bought into it pretty quickly.” bassist and co-writer Ollie recalls. The entirely self-released ‘The Otherside’ was made available as a digital single on March 10th 2015, and hit #53 in the iTunes Rock Charts, “…We really couldn’t believe the response the track had, we had people messaging us from Scotland, Germany, America, all over the place, it was pretty crazy.”
“…Will Alford is one of the finest front men that Devon has produced in recent years…WITTERQUICK needed to be played on the show, and the response from listeners was proof we made the right decision…” – James Santer BBC Introducing Devon
They spent just under 2 weeks recording their debut 5-track EP with world renowned producer Romesh Dodangoda (Bring Me The Horizon, Twin Atlantic, Lower Than Atlantis) at his studio in Cardiff. Ollie says that working with Romesh was a huge step for them, and they didn’t take it lightly, “We got a call back from Romesh saying that he’d love to work with us, that was one of the first moments when we thought ok…this is getting serious.”
“WITTERQUICK are a band with a massive sound and anthemic songs. I knew I wanted to work with them as soon as I heard Rise!” - Romesh Dodangoda Long Wave Studios
“This EP had to be everything we wanted to change in music, it was our chance to say what we wanted to say, and we didn’t pull any punches…” The band jumped at the chance to work with Alex Wharton at the legendary Abbey Road Studios, who offered to master the recording for them, “It was a pleasure mastering WITTERQUICK, it’s great music which I really enjoyed!” This was the final piece of the puzzle and ensured that, along with their arsenal of songs, they had a competitive product that would turn heads.
“We don’t work with any professional writers. We’re not created with auto-tune. We’re not designed by a focus group. What you see, and hear, is us. And only us.” - Will
WITTERQUICK’s sound combines the intensity of punk-rock, and the feel of the 70’s and 80’s stadium greats, with the melody of a pop band.
“We’re not modelling ourselves on anyone, we don’t want to be like anyone else, if you aren’t doing your own thing, what’s the point?” – Ollie
Their first single ‘Soldiers’, taken from their debut EP ‘Beneath the Spinning Lights’, will be released October 30th (no label).
“Be part of the change.” - Will