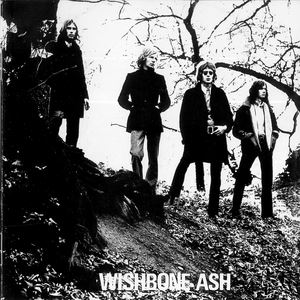 Wishbone Ash is a British rock band which achieved its greatest success in the early and mid-1970s. Their most popular albums included Wishbone Ash (1970), Argus (1972), There's the Rub (1974), and New England (1976). They were one of the first bands to use twin lead guitars.
Wishbone Ash can trace its origins back to Torquay, Devon, England, a seaside resort in the southwest of the country. It was there that Martin Turner and Steve Upton first performed together; Turner on bass, Upton on drums, before moving to London in 1969 to seek fame and fortune. In the capital the decision was made to place an advertisement for a keyboard player and a lead guitarist. The resulting audition threw up two guitar leads, but nobody could decide who to choose and the trademark twin-lead sound of Wishbone Ash was born.
Ted (David) Turner and Andy Powell soon went through the poverty and growing pains of a new band, but were fortunate that Miles Copeland was championing their cause and a fairly rapid progression was achieved. The first Album, Wishbone Ash, was released in December 1970 and their second, Pilgrimage, surfaced just six months later to reach #6 in the NME charts. Great things were just 11 months away with the release of Argus (1972) -- possibly the band's best album; certainly their most commercially successful -- which reached #2 in the UK charts and went gold. Argus is considered to be one of the great rock classics of all time. The next album, Wishbone Four, only 12 months later, went silver.
After these early highs, Ted Turner decided that he had had enough, and left the band to be replaced by Laurie Wisefield. Although Laurie’s style was not to everyone’s taste, he was generally well liked by the fans and brought a slightly harder edge to the folk-tinged progressive rock that was the Wishbone Ash formula. Wisefield was a dynamic player and became an excellent partner to Andy -- they were to play together for a very successful 11 years and the MKII version of the band is very well thought of for most of its output. About this time the band became more influenced by America and would eventually move there.
The next album, There's The Rub (1974), was recorded in Florida and produced by Eagles producer Bill Szymczyk. Once again it was to do well, achieving silver disc status. There's the Rub included the instrumental piece F.U.B.B. Steve Upton was arrested in New Zealand for announcing at a concert it's full title. In New Zealand, swearing in public is a criminal offense, and when Upton announced the title at an outdoor concert, a woman sunbathing in her garden nearby complained to the mayor. Upton spent the night in jail, and the album reached #3 in New Zealand due to the publicity.
It was inevitable that a turkey was due and to fans Locked In (1976) fit this bill. This record was not released -- it escaped! Fortunately things were much better with the quality of the following albums and although the high chart positions were gone, the fans were enjoying some competent, well-crafted output.

After 11 years in the band, Martin Turner decided to leave. This move began a period of frequent changes of bass player with the likes of John Wetton and Trevor Bolder being two of the better known; however, Wishbone Ash always has attracted musicians of the highest order. A much more controversial move was the introduction of Clair Hamill to fill in some of the vocal talent Martin had taken away with him. Clair was not popular with the fans which was perhaps a little unfair. She had contributed backing vocals on Just Testing (Turner's last album (1980), which he had also produced) and had co-written the excellent Living Proof, which is still a crowd favourite today. Her stay was short-lived with Andy Powell taking on more vocal duties. Wisefield left in late 1985 and the band continued to tour with various replacements, but were very much in limbo until 1987 when a miracle occurred. Miles Copland persuaded the original lineup to reform for a project for a music charity that he was helping, and a Hammersmith Odeon concert which the BBC recorded resulted. The project produced an instrumental album Nouveau Calls (1987), which was very well received. Even better received was the fact that three years of the original lineup were to follow.
Just when things were going so well, Steve Upton decided to quit the business entirely in 1990, to be replaced by Ray Weston. Martin Turner carried on for another year before leaving to pursue a solo career, and Ted left two years later. The next five years saw lots of personnel changes, but eventually resulted in a good period of stability with Ray Weston returning and Bob Skeet joining on bass in 1998.
The new millennium has also seen stability in respect of Andy's guitar partner, with the last 6 years being filled by Ben Granfelt and subsequently Muddy Manninen, both of whom come from Finland. 2005 saw Wishbone Ash celebrate their 35th year. 2006 heralded the new album Clan Destiny (the first featuring Muddy as guitarist). 2007 saw the exit of long-term drummer Ray Weston, due to the increasingly hectic pace of band life. Joe Crabtree (formerly of The David Cross band) stepped up to fill his place. With regard to new releases, 2007 saw First Light, which features original recordings of the songs featured on their debut album, as well as some outtakes. Also released that year was the new album The Power of Eternity (partly featuring Joe Crabtree on drums), which coincided with the Autumn tour.
Wishbone Ash are still performing 150 gigs a year in the U.S. and Europe. They get very supportive crowds with good numbers turning out all over Europe -- the U.S. tends to attract smaller audiences, but very committed fans. If you want to hear classic Wishbone Ash, get ahold of Argus. Visit their web site www.wishboneash.com, where tour dates and albums, etc. can be obtained.