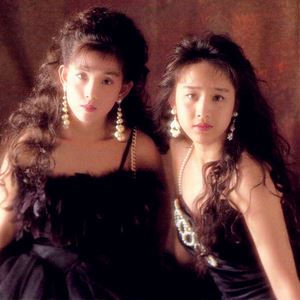 There are at least 3 artists with this name:
1. Wink (ウィンク) were a popular Japanese pop female duo in the late 1980s and early-to-mid 1990s. The two members were Sachiko Suzuki (鈴木早智子 Suzuki Sachiko, born February 22, 1969) and Shōko Aida (相田翔子 Aida Shōko, born February 23, 1970). They released their first single on April 27, 1988, and their final release was on 31 March 1996. Many of their singles topped the Oricon charts in Japan, including their biggest hit, “Sabishii Nettaigyo”, which has since been covered by W.
In 1987, Sachiko Suzuki and Shōko Aida both entered a beauty contest given by the magazine “Up to Boy”. Sachiko won the grand prize, while Shōko was one of the runner-ups. As a result, Wink was formed the next year, and in April they debuted with the single “Sugar Baby Love”.
“Sugar Baby Love” and their next single, “Amaryllis”, did well, but it wasn’t until the release of their third single “Ai ga Tomaranai ~Turn It Into Love~” (a Japanese-language cover of Kylie Minogue’s “Turn It Into Love”) the next year that they became popular. It quickly became #1 on the Oricon charts, along with many of the singles that followed it. During this time, Wink also had their own chain of stores, “Winkers”, which sold Wink memorabilia. There were three stores in the Harajuku area of Tokyo alone.
Wink had a different style and image than many other J-pop idols of the era who focused on a ‘cute’ style. Wink had emotionless facial expressions while they sang, and almost never smiled. They also dressed in extravagant lolita fashions, and almost looked doll-like. This uniqueness helped make them popular.
2. Josh Wink (born Joshua Winkelman in 1970) is an electronic music DJ, label owner, producer, remixer, and artist. He is a native of Philadelphia, United States. Wink's style is a mixture of techno, acid, house, drum and bass, and experimental music. In 1995, he released several hits, including "Don't Laugh," "I'm Ready" (which hit #1 on the Hot Dance Music/Club Play chart) and "Higher State of Consciousness," which topped the dance charts in Europe. He has had many recent club hits such as "How's Your Evening So Far?" (with Lil Louis) and "Superfreak (Freak)" and has also gained a lot of attention for his remixes of FC Kahuna, Paul Oakenfold, Moby, Towa Tei, Ladytron and Depeche Mode, among others.
Josh Wink also has founded his own successful record label called Ovum Recordings with King Britt. He has recorded releases as: Wink, Winc, Winks, Winx, The Crusher, E-Culture and Size 9.
3. German rock band (bandmember Thomas Godoj - winner of Deutschland sucht den superstar (German Idol) 2008).