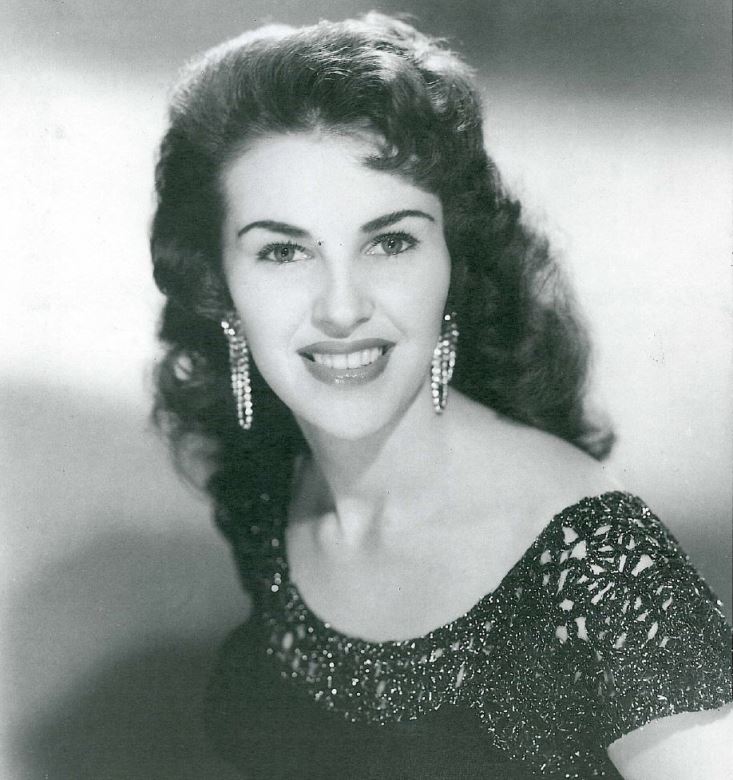 Wanda Jackson (born Wanda Lavonne Jackson, October 20, 1937 in Maud, Oklahoma) is an American rock and roll singer. Having made her debut recordings at the age of nineteen, she became one of the first popular female rock and roll singers in history and as a result, a pioneering and influential figure in female musicianship. She is known as the "Queen (or First Lady) of Rockabilly."
Jackson was still in high school when country singer Hank Thompson heard her sing on an Oklahoma City radio show and asked her to record with his band in 1954. She dated Elvis Presley, who encouraged her to step away from the country-tinged gospel she had been performing since childhood and try her hand at rock and roll. She developed her own distinctive voice and performed in a variety of styles, from folksy traditional tunes to country twang and high yodels to throaty, suggestive ballads. She was a prolific singer of songs with wry lyrics such as "Fujiyama Mama," which contained many references to the World War II bombing of Hiroshima and Nagasaki; ironically, it became a #1 hit in Japan. Her biggest hit was 1959's "Let's Have a Party."
Jackson achieved great and continuing success throughout Europe, Asia, and Australia, but has never found the same level of fame in her native United States. She toured with rock and roll pioneers such as Elvis Presley, Jerry Lee Lewis, and Buddy Holly. She has been nominated for two Grammys, and has been awarded the Oklahoma Native Daughter Award. She has been inducted into the Oklahoma Country Music Hall of Fame, the Rockabilly Hall of Fame, the International Hall of Fame, the International Gospel Music Hall of Fame, the Oklahoma Music Hall of Fame, and the German Country Music Hall of Fame, and in 2009 was finally inducted into the Rock and Roll Hall of Fame as an Early Influence.
A born-again Christian, Jackson and her husband/manager Wendell Goodman abandoned rock and roll in 1971 and spent the next 25 years performing gospel in churches.
In 1996, Jackson was invited by alt-country singer Rosie Flores to duet with her on an upcoming album. The two were so pleased with the results that Jackson joined Flores on a handful of promotional club dates which were soon extended into a five-week North American tour. Jackson, plesantly surprised to discover that she and her songs were known by a generation of rockabilly fans her grandchildren's age, soon assembled her own band and returned to clubs and festivals, where she continues to perform.
In recent years Jackson has recorded with such artists as The Cramps, Lee Rocker, Dave Alvin, and Elvis Costello. 2006 saw the release of a new Jackson album, I Remember Elvis.
In 2009, it was announced that Jackson would start work on new recordings with Jack White. The resulting album, The Party Ain't Over, was released on January 25, 2011. It included a cover of the Bob Dylan rockabilly song, "Thunder on the Mountain" and the Amy Winehouse song "You Know I'm No Good". On January 20, 2011, she performed with Jack White on The Late Show With David Letterman and again on January 25, 2011, on Conan.