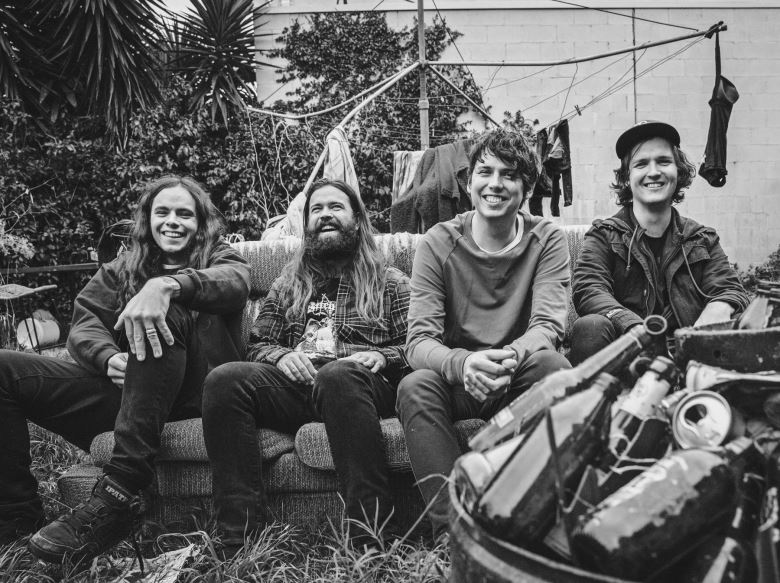 Violent Soho are an Australian rock band from Mansfield, Queensland. Band members Luke Boerdam, James Tidswell, Luke Henry and Michael Richards attended school together and formed Violent Soho in 2004. Their debut EP, Pigs and T.V., was released in early 2006 and received wide acclaim; 'Blunt Magazine' hailing Violent Soho's Vines-esque sound as "boisterous pop rock reviving the spirit of the grunge era." Following the release of their debut EP, the band continued to play shows in and around Brisbane, and several shows in Sydney and Melbourne and elsewhere on the east coast. Notably, they toured with The Grates in 2007. They were also part of the lineup for the 2008 St Jerome's Laneway Festival, playing in Melbourne, Brisbane and Sydney.
Violent Soho toured with Faker and Grafton Primary in May 2008, playing songs from their first full length album We Don't Belong Here, which was released on 7 June 2008 on the Emergency Music label. Following the release they toured all around Australia, then played shows in London, New York and Los Angeles in November 2008 before returning home to play more shows and summer festivals, such as Homebake, The Meredith Music Festival, Falls Festival and Southbound Festival.
On 20 February 2009, Violent Soho announced on their MySpace page that they had signed an "overwhelmingly exciting" deal with Ecstatic Peace! Records, a record company headed by Sonic Youth's Thurston Moore, a hero of the band. They also signaled their intention to spend much of 2009 touring Australia, touring and recording in the US, and mentioned that a new album that "elaborated" on the material recorded for We Don't Belong Here was due for worldwide release in the third quarter of 2009. On 19 December 2009, the band announced that they would release a limited-edition EP containing re-recorded versions of "Bombs Over Broadway" and "Son of Sam", which would initially only be for sale at US tour dates.
The band would later part ways with Moore's label and in 2013 Boerdam stated:
Being on Thurston Moore's label doesn't happen that often for an Australian band. It gave us a great sense of validation as a band. Just being able to quit your day job and tour for 18 months made us better. Whether it results in Facebook likes or record sales I don't care, the real impact was more personal.
On 9 March 2010, Violent Soho released a second, self-titled album on Ecstatic Peace! The album was produced by Gil Norton, who previously worked with the Pixies, and the single "Jesus Stole My Girlfriend" was released from it.
Violent Soho performed at the 2011 Laneway Festival, followed by an Australian tour supporting Australian alternative rock band Jebediah in mid-2011. The band was then chosen by Les Savy Fav to perform at the ATP Nightmare Before Christmas festival that they co-curated in December 2011 in Minehead, England, UK.
The band toured with English band Arctic Monkeys in early 2012 during the same period that the band members returned to Australia. Violent Soho was nominated for an ARIA Award that year and Tidswell revealed in an October 2013 interview that he received congratulations from friends while on his way to seek employment at a local McDonalds store, as the band was no longer signed to a label and was without any financial support at the time.
The band then signed to the Melbourne-based Australian independent record label "I Oh You" and released a new single called "Tinderbox" on 27 August 2012. In November 2012, an Australian tour coincided with the release of the double-single "Tinderbox"/"Neighbour Neighbour".
In April 2013, the band revealed via their Facebook account that they were in the process of recording their next full-length album. The album was produced by Brisbane producer Bryce Moorhead and recorded at Moorhead's Shed Studios.
In July 2013, Violent Soho announced that their next album is entitled Hungry Ghost and will be released on the I Oh You label on 6 September 2013—the first single, "In The Aisle", was released on 8 July 2013. Regarding the sound of the album, Boerdam asserted in an October 2013 interview: "There's no reason to lock the band down to that grunge label which we were constantly given, despite us never using that word. We realised that we didn't care, as long as we were happy with the music we were making."
A video for the song "In The Aisle" was released on 16 July 2013. Directed by Tristan Houghton, the video documents a nude cyclist riding around Brisbane distributing flyers for a nude bike ride event. A video for the song "Covered In Chrome", filmed in bass player Luke Henery's house, was released on 16 October 2013. Ideas and imagery in the lyrics for the song were informed by a Wikipedia article about the Hungarian uprising in 1956 which vocalist and guitarist Luke Boerdom had been reading.
The album title was inspired by the book "Culture Jam" by Kalle Lasn. As Luke Boerdom explained in a September 2013 online article, "From memory the term went something like this: “We sit around on couches, buying what we think makes us who we are, like a hungry ghost”. I looked up hungry ghost and it actually comes from traditional Chinese Buddhism. It means to have a non-shakable addiction/desire, and you lose yourself to that desire, you lose your identity." Regarding the general themes of the album's lyrics, Boerdom said: "Throughout the record I play with the idea of escaping a masked reality. I like to explore this concept that we live in a form of hyper-consumer reality and we lack an authentic human experience. In a few songs I try and focus on outsider suburban characters that are usually hidden and outcast by society, reenacting tapping into their reality and what they view as normal."