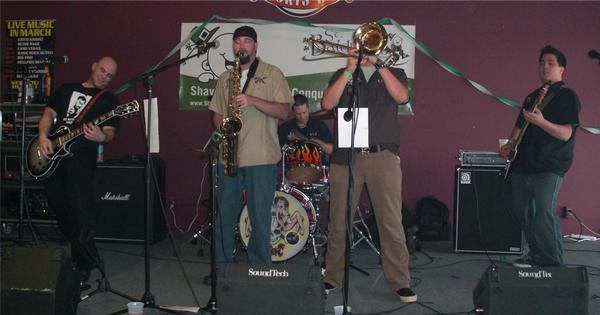 These days a lot of indie bands say they're DIY, but few live up to the billing as powerfully as Victims of Circumstance. Fully embodying the title of their explosive debut album Do It Yourself, the hard driving Tampa, Florida-based pop-punk band has built a strong following from the ground up. Victims of Circumstance has won over audiences with their catchy pop hooks, distinctive fusion of punk and ska and an ongoing commitment to the local music scene.

In the fall of 2005, drummer Glenn Stewart and guitarist Michael Smyth began the collaborative friendship that formed Victims of Circumstance's foundation. While working together at a debt settlement company, the two found themselves returning to the office late at night and on weekends to work on songs that would eventually become their debut album. The boys invited their friends Alan Garcia and Aaron Zylman to play bass and trombone and round out the sound of the band. "We had a full drum kit, a half-stack, a bass rig and half-a-dozen guitars lying around Glenn's office. No one noticed," says Smyth. "We just kept the door closed. It was hysterical." Eventually they converted some unused warehouse space next to their office into a rehearsal room. Over time they purchased equipment in order to make a demo and eventually the impromptu rehearsal space developed into a state of the art recording studio.

Their debut album was recorded at Stewart's newly built Audio Impact Studios in Clearwater and was co-produced by Victims of Circumstance and famed Mighty Mighty Bosstones’ saxophonist, Tim "Johnny Vegas" Burton. Stewart's friendship with Burton extends back to 1994 when they met at a Bosstones show in St. Petersburg. The two shared a love of golf and started playing together anytime the sax man was in town. "Ironically," says Stewart, "I was involved in so many other projects that I don't think Tim even knew I was a drummer." Years later, Stewart approached Burton to play Sax on what ultimately became the Do It Yourself release. "After hearing the demo, I thought the songs were great and I felt they were doing something different, so I offered to produce it" says Burton.

Smyth, who wrote many of the songs for Do It Yourself, adds, "I've always written songs that I would want to listen to myself—short and fast, with good guitars and great beats for people who have short attention spans – like me!" "We're big fans of punk and ska, and the Bosstones are among our influences along with groups like The Ramones and Against Me," says Smyth. "But, one of the best things is that our fans feel we have really created our own sound," adds Stewart. This vibe is reflected in some of Do It Yourself’s key tracks, including the brassy, supercharged "Legacy", about taking hold of your life and fearlessly moving forward, the politically-charged, tongue in cheek "Me And Alex P. Keaton" and the fiery jam "My Fate," about not letting your past dictate your future.

What happened next was only natural considering the band’s DIY ethic. While they were putting the finishing touches on the album; Burton, Stewart and Smyth talked about forming a record label. Thus the independent label, Financial Records, was born; and Victims of Circumstance’s Do It Yourself was released.

The critically acclaimed debut has been a hit on the college radio circuit obtaining airplay on over 150 stations nationwide. Their hard work has paid off and earned them a loyal following and respect throughout Florida. Beyond their regional success in Gainesville, Jacksonville and Tampa, the VOC, as they are known, are particularly popular in the Northeast in such states as Ohio, Massachusetts and New York. At the end of 2007, they played as one of the opening acts along with The Pietasters and Big D and the Kids Table at the Bosstones' 10th Official Hometown Throwdown at Cambridge's famed Middle East Club. The band added saxophonist Jay Atheney in February of 2008 to complete their horn section. They were awarded the "Best Horn Section in a Ska Band" award by Creative Loafing in 2009.

The band is also known for financing and promoting shows in Tampa - area nightclubs and theatres. In July 2007, the VOC sponsored and hosted the successful outdoor music festival, the "Summer Free-For-All," which highlighted local acts. Some of these artists are included on a compilation of local and national acts released by Financial Records called Professional Help.

VoC released their 2nd full-length album "Roll the Dice" in August of 2009. Produced by Big D and the Kids Table bassist Steve Foote, the album features huge horn lines, and Michael Smyth's signature vocal stylings. This album can be heard here on last.fm for free!
In July of 2009, Lindsey Pittard became the band's new bassist. By the end of 2010, the boys will be hitting the studios once again to begin production of their 3rd studio album, and they are planning a European tour for the Spring of 2011.