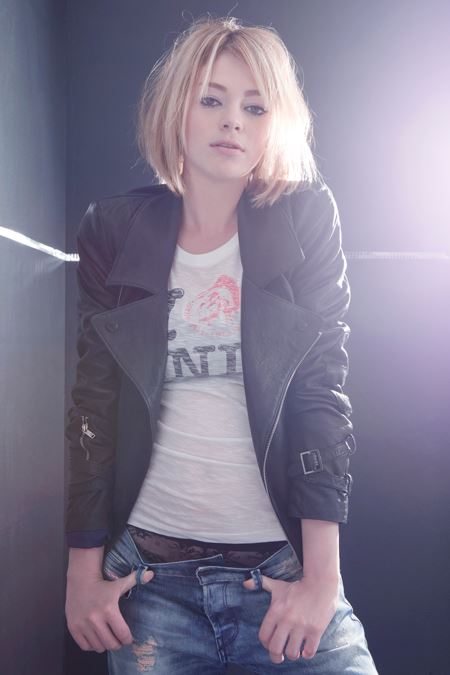 Uffie (born Anna-Catherine Hartley on December 9, 1987) is an American/French underground electro artist currently signed by French electronic record label, Ed Banger Records. She was born in Miami, raised in Hong Kong and now lives in Paris. Her stage name, Uffie, comes from the French words "Un Oeuf "(an egg), a nickname her father gave her as a child for being so rowdy. Her career took off in 2006, when she released her singles Pop The Glock and Ready To Uff, which gained her fame from the media, critics and fans alike.
Her long-awaited debut album, Sex Dreams and Denim Jeans, was successfully released through Ed Banger Records, Because Music and Elektra Records on June 15, 2010. Singles released from the album include ADD SUV, MCs Can Kiss and Difficult.
After the successful release of Pop The Glock and Ready To Uff, the tracks Hot Chick and In Charge were released. In March 2007 Dismissed, was released on Ed Rec Vol 2, and Uffie collaborated with label mates Justice on Tthhee Ppaarrttyy (from Justice's album †). Then in the summer of 2007, First Love, produced by Mr. Oizo and Brand New Car, produced by Feadz were released together as an EP.
Then in 2008, Robot Oeuf was released of Ed Rec Vol. 3 and her track Steroids ft. Uffie was featured in the Mr. Oizo album, Lambs Anger. Crystal Castles sampled Pop The Glock in their track Make It Hott.
Since 2006, Uffie began production on her debut album, Sex Dreams and Denim Jeans, but there were many delays in the recording process, taking four years total to release the album. She states that the main delays included hectic touring and traveling schedules, her break up with longtime boyfriend/collaborator Feadz making the recording process "awkward at first", and her marriage and divorce to highly successful French graffiti artist, André Saraiva. Then when Uffie learned of her pregnancy in 2009, she decided to take a brief hiatus to find herself and grow as an artist. The album was then announced to be released in early 2010, but a contract-conflict between Uffie and Lou Reed delayed the album by about six months. Uffie then labeled Lou Reed as "fucking difficult".
Uffie's debut album, Sex Dreams and Denim Jeans, released in 2010 features production by numerous Ed Banger Artists such as Mr. Oizo, SebastiAn and Feadz, and also features production from pop producer Mirwais. Pharrell was featured in the lead single from the album, called ADD SUV. Also in 2010, Uffie, who was originally studying to be a fashion designer in Paris, released her collection for clothing brand, Diesel.