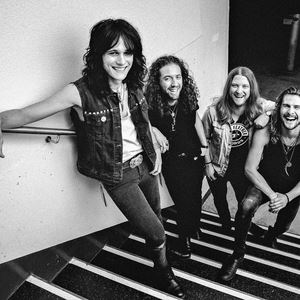 Tyler Bryant lives for music. Passionate about expressing himself and connecting with others through his songs and sounds, Tyler moved to Nashville from Honey Grove, TX when he was 17 to write songs and start a band. He has pushed the musical limits of guitar, vocals, and performance, and has captured the attention of the music scene with his spectacular talent and rare showmanship.
Tyler Bryant, currently 21 years old, is a guitar prodigy who has shared the stage with Aerosmith, Jeff Beck, Heart, REO Speedwagon, Paul Simon, BB King, Pat Benatar, The Arc Angels, Vince Gill, Gavin Degraw, Joe Bonamassa and many others. At age 15, Tyler won the Robert Johnson Blues Foundation's New Generation Award, which recognized him as one of the most promising new artists on the music scene. He has also performed at Eric Clapton's Crossroads Guitar Festival in Chicago, and was signed by John Huie at Creative Artists Agency on the spot, after his first showcase in Nashville. Tyler signed to Sony ATV in 2011 and to Carved Records (distributed by EMI) in 2012.
Tyler recalls a musical turning point at age 11, when he walked into a music store in Paris, Texas and heard 63-year old bluesman, Roosevelt Twitty, on guitar. “He was playing a Lightning Hopkins song,” Tyler says. “He was just sitting in the corner of Holly Bond’s Music store, and was singing and playing with such emotion that something translated deeply, and I wanted to understand. I knew I wanted to play. Whenever you hear someone with that much soul, when they really believe what they are playing, it’s so inspiring.”
Along with Beck, Santana, and Slash, Tyler is featured in the award winning film, “Rock Prophecies,” which is directed by John Chester, and produced by Tim Kaiser (Seinfeld and Will & Grace). “Rock Prophecies,” is now airing nationally on PBS, and is available to watch online at Netflix and iTunes. Thousands of people across the world have been playing Tyler’s song, “Who I Am,” since its release on Guitar Hero® 5. Tyler was the first unsigned artist to have a song on the game.
Tyler announced a new band name in 2011, Tyler Bryant & the Shakedown, as he wanted to recognize his band in everything he does. The Shakedown consists of Graham Whitford (Son of Brad Whitford from Aerosmith) on guitar, Caleb Crosby on drums and Noah Denney on bass. Tyler and the band embarked on their first headlining tour last summer and continued touring well into November. The band only paused for the month of October, while Tyler opened for Jeff Beck on his Canadian and US Tour. Jeff invited Tyler to play with him during his encore set each night. The last opener that Jeff invited to play with him was Stevie Ray Vaughan in 1989. Tyler & the Shakedown are in the middle of their second headlining tour, which includes tour dates all around North America and in Canada throughout 2012.
Tyler’s musical influences include the inspirations of Tom Petty and the Heartbreakers, The Rolling Stones, Jimi Hendrix, The Black Crowes, and Jeff Beck. Tyler has recorded with music producers Kevin Shirley (Led Zeppelin), Jed Leiber (Jeff Beck), Andy Johns, Jay Joyce,
Dennis Herring and Roger Alan Nichols. Tyler recently contributed to the score for the Abraham Lincoln: Vampire Hunter soundtrack. The movie, produced by Jim Lemley and Tim Burton, was released on June 22, 2012 by Fox.
Tyler has been busy recording and songwriting with some of the music industries best. He released his first EP, “My Radio” in March of 2011 and then released his most recent album, “From The Sandcastle,” in late September of 2011. 'Shackles' a track from "From the Sandcastle", was the iTunes' Discovery Download in November 2011. The album was also featured in iTunes’ Rock on the Rise section for over eight weeks. Tyler is currently recording his first full-length album, to be called “Wild Child”. The new album will release this fall.
With a fearless obsession for his art, Tyler Bryant is advancing his music without limits.
“To be 18 and play like this kid is the rarest of the rare. Hands down a future guitar god.” – Vince Gill